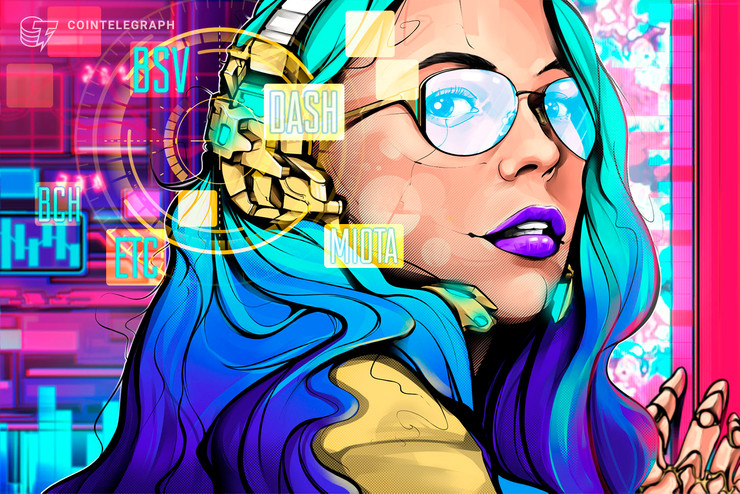 Most major cryptocurrencies have started the new year on a positive note. However, in the past 24 hours, the crypto markets are witnessing a sea of red. This shows that the rally has hit a roadblock, which could result in a minor correction or consolidation for the next few days.

Such a move will be healthy for the crypto markets because it will shake out the weaker hands. The next dip will also give an idea about the cryptocurrencies that have bottomed out and have started a new uptrend.

Acclaimed veteran trader Peter Brandt believes that Bitcoin has bottomed out and is unlikely to drop to $6,000. In a market discussion with Cointelegraph, Brandt said that the fall in Bitcoin’s price has driven the weak hands out of the market and the strong hands have accumulated at the recent lows. Brandt also advised crypto traders not to aim for short-term gains but position themselves for long-term gains in Bitcoin.

With China moving closer to launching a digital yuan, the US Securities and Exchange commissioner Hester Peirce said that a lot of innovations are happening in China as the government there recognizes the potential of the technology. She called upon the US to learn from it.

While cryptocurrencies have generated huge wealth for traders, they can also be used to give back to society. Over the past few weeks Australia has experienced some of the worst wildfires in history which are estimated to have caused irreparable damage to the environment. To help in the rebuilding process, Cointelegraph has partnered with the ecological preservation organization Oxygen Seven to raise money for the Australian Wildfire Fund. Donations can be made here.

The news flow about the ongoing legal battle between Craig Wright, who may or may not be Satoshi Nakamoto, and the estate of his former business partner Dave Kleiman has again helped Bitcoin SV (BSV) become the top performer of the past seven days.

In the early part of the week, the price of Bitcoin SV surged to a new lifetime high on the speculation that Wright had received a list of public keys for $8.9 billion worth of Bitcoin held with the Tulip Trust.

However, later in the week, it came to light that Wright had not submitted any information regarding private keys. That led to a crash in the price of Bitcoin SV. After the hugely volatile week, what is the way forward? Let’s analyze its chart to find out.

The price of the BSV/USD pair shot up from a weekly low of $158.69 to a high of $458.74, which is an increase of 189%. Such vertical rallies are rarely sustainable. The bulls could not hold on to the higher levels and the pair has corrected over 45% from its lifetime highs.

A new lifetime high is a positive sign but the failure to hold on to the highs indicates profit booking by the bulls. The long wick on the weekly candlestick shows that traders quickly booked profits at higher levels.

If the price sustains below $255.62, a drop to $222.95 is possible. Though a relief rally is possible, we anticipate the pair to consolidate for the next few weeks before making its next move.

Dash (DASH) made the list of top performers for the second successive week with a rally of about 50% in the past seven days. It gained sharply in the early part of the week and then gave back some of its gains in the latter part of the week. There was no specific news that could be attributed to the rally. After a volatile week, what can the traders expect in the next few weeks? Let’s study its chart.

We anticipate the pair to consolidate for a few weeks, after which the up move is likely to resume. On a break above $142.3419, a move to $180 is possible. Our bullish view will be invalidated if the bears sink the price below $77.7262. After the recent rally, we suggest traders wait for a few days, for a new buy setup to form before jumping in to buy again.

Ethereum Classic (ETC) was the third-best performer of the past seven days with a rally of about 45%. When the sentiment turns positive, the market participants buy on every bit of favorable news. ETC picked up momentum on the announcement that leading cryptocurrency exchange Binance would launch ETC futures trading from Jan. 16. After the recent run-up, can it build upon its gains or will it succumb to a correction? Let’s analyze its chart to see what does its technicals project for the next few days.

The rally in the ETC/USD pair carried it above the overhead resistance at $10, however, the bulls could not hold on to the gains. This shows profit booking at higher levels.

Currently, the price has again dipped back into the $3.40 to $10 range. We anticipate the pair to consolidate in the top half of the range for the next few weeks, similar to how it had done in June of last year.

The traders can wait for the consolidation to end and the price to resume its uptrend before buying again.

IOTA (MIOTA) has been among the top performers after a long gap. Research company Fundstrat released a bullish report on IOTA on Jan. 16. While fundamental reports are a good read, they should not be the sole reason to take a trade. Let’s study the technicals of the chart to see if we spot a bottom and a buying opportunity.

With the recent rally, the IOTA/USD pair has re-entered the $0.207622 to $0.5410 range. This is a positive sign as it shows that the market has rejected the breakdown from the range.

The bulls might face resistance at $0.244553 but if the next dip finds support at $0.207622, it will signal a likely bottom. Both moving averages have flattened out and the RSI has risen to just below the 50 level, which points to a range-bound action for a few days.

Our view will be invalidated if the bears sink the price below $0.207622. If this level breaks down, a retest of $0.151096 will be on the cards. The traders can watch the next dip and initiate long positions after the price breaks out and sustains above $0.244553.

Bitcoin Cash (BCH) made it to the list of top performers with a rally of about 23% in the past seven days. This is the fourth successive week that BCH has been among the top performers. During the week, it was overtaken by Bitcoin SV as the fourth largest coin in terms of market capitalization but it quickly reclaimed back its position. After its stellar run in the past few days, can it extend its up move further or is time for a correction? Let’s analyze its chart.

The BCH/USD pair broke out of the overhead resistance at $360 and made a high of $403.88 during the week. However, the bulls could not sustain the price above $360, which shows profit booking by short-term traders.

Contrary to our assumption, if the bears sink the price below $306.78, the decline can extend to $270.15. The traders can wait for the correction to play out before initiating long positions once again.