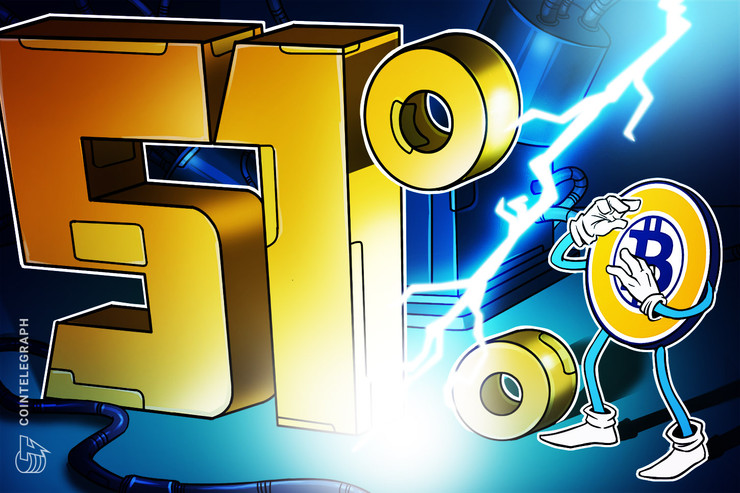 The Bitcoin Gold (BTG) blockchain has suffered a 51% attack resulting in over $70,000 worth of BTG being double spent. According to a GitHub post by James Lovejoy, a researcher at MIT’s Digital Currency Initiative, the hard-fork of Bitcoin was hit by two deep reorganizations of over 10 blocks on Jan. 23 and 24.

A 51% attack is a situation where a single entity or group controls over half of the hashpower securing a blockchain. This then allows control over confirmation of new transactions, and the power to reverse completed transactions, allowing the double spending of coins.

Just over six hours later, in the early hours of Jan. 24, another attack removed 15 blocks and added 16. 5,267 BTG ($53,000 at the time) were double spent in three transactions that were redirected.

Bitcoin Gold uses the Equihash algorithm known as Zhash, in order to remain mineable on consumer graphics cards. Based on Nicehash market prices for Zhash, the estimated cost of each blockchain reorganization attack was around $1,700.

The attacker would have recouped around the same value in block rewards, meaning that the attacks at least broke even, and were possibly profitable if the double spend was successfully extracted from the system.

At the time of the attack, major cryptocurrency exchange Binance allowed trading of BTG deposits after six confirmations, and withdrawal after 12 confirmations. A 14 or 15 block reorganization would therefore have evaded both of these escrow periods.

Binance has since increased its withdrawal requirement to 20 blocks, although this still does not preclude the possibility of a 51% attack being financially viable.

As Cointelegraph reported, Bitcoin Gold was previously the subject of a 51% attack back in May 2018, when an estimated $18 million of BTG was overspent, leading to the coin being delisted on Bittrex.