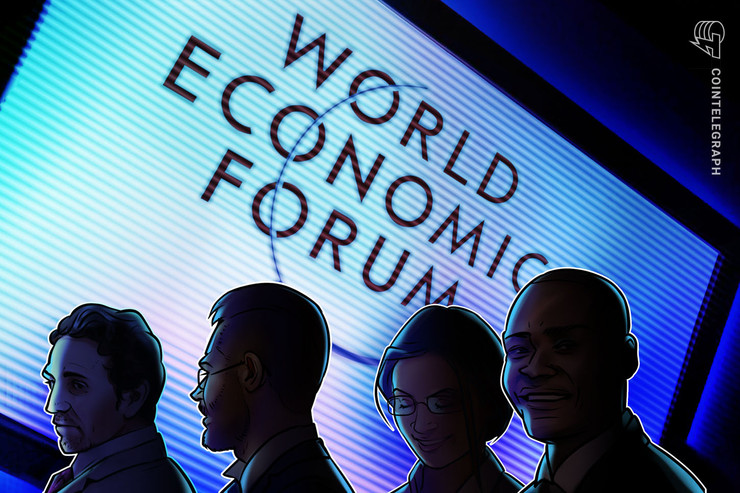 Last week saw a whole host of world leaders — including United States President Donald Trump and Prince Charles of Wales, along with a number of other prominent dignitaries — come together to attend the 2020 iteration of the World Economic Forum that was held in Davos, Switzerland Jan. 20–24. As part of the five-day event, the WEF announced its decision to establish a global consortium for governing digital currencies — including stablecoins. Following the news, the price of Bitcoin proceeded to swiftly rise from around the $8,200 mark to $8,455 within an hour’s time.

The consortium will consist primarily of various traditional financial institutions, global government agencies, economists, academics, as well as members of the forum’s different communities. In regard to what the consortium’s core goals are, a report released by the WEF states that in order for digital assets to become a part of the mainstream financial ecosystem, they have to be governed using an innovative regulatory structure that is transparent, inclusive and interoperable in nature. Thus, the body will seek to create such a framework as soon as possible with the help of the public and private sectors.

Lastly, in comparison to WEF 2019, where the crypto industry at large was at the receiving end of a lot of flak — with people like PayPal CEO Dan Shulman and JPMorgan Chase CEO Jamie Dimon bashing digital currencies for their perceived nonutility — this year’s event has seen a marked difference in how a number of high-profile individuals and companies have begun to view cryptocurrencies and its underlying technology — i.e., blockchain. For example, according to KPMG’s U.S. blockchain lead, Arun Ghosh, the accounting giant will be making use of blockchain (in conjunction with IoT technology) this year to help solve many climate change-related issues.

Even though the WEF appears to have become increasingly more inclusive in its approach toward the crypto sector on paper, a number of experts believe that despite emerging technologies such as blockchain and artificial intelligence finally getting the recognition they deserve, most of the talk surrounding crypto in Davos has been about nation-states and central banks issuing their own digital currencies — an idea that a lot of people believe is self-defeating. For example, in an exclusive interview with Cointelegraph, Riccardo Spagni, a major contributor to Monero’s core development, was quoted as saying:

“They’re talking about how it’s going to be inclusionary, but at the end of the day, they still want to police it. They still want to regulate it. So, it’s not really inclusionary. It’s inclusionary within the same framework that they’ve always had. So, that’s a little bit disappointing because you can sense that it’s still like the same room full of old school bankers, old school regulators. They are reluctant to change.”

He further added that with the global crypto community starting to become more and more unified in its cause to help spread awareness regarding this burgeoning space, the financial elite of the world are being given a clear message that “if they don’t adapt, if they don’t change, they’re going to end up losing.”

However, on a more optimistic yet cautious note, Mark Esposito, a professor at Harvard University and the Thunderbird School of Global Management, told Cointelegraph he is hopeful that with more and more people beginning to understand the potential of crypto tech, it seems as though the global finance industry is on the threshold of a new beginning:

“You see all these senior people that don’t need to talk about crypto the way they are now. So, it looks like 2020 is going to be the tipping point of a major transformation. We are waiting for a new narrative to happen, and fintech is part of the new narrative.”

Top crypto-related news to come out of Davos last week

In addition to the forum establishing a consortium for governing digital assets, it also released a framework designed to help central banks create their very own state-backed cryptocurrencies, or CBDCs. According to an official press release, this latest “CBDC Policy-Maker Toolkit” has been devised in conjunction with a number of central banking institutions, economists and international organizations. In this regard, it bears mentioning that the Bank of Thailand and the Central Bank of Bahrain are already making use of this toolkit.

News of the aforementioned release was met with a lot of market hype, with value investor Bill Miller and Boston University professor Mark Williams stating that this announcement signifies a change in how the world’s economic elite now consider crypto and blockchain technology.

Also, as part of the Davos 2020 forum, Singapore-based crypto exchange Huobi announced the launch of its new crypto brokerage platform that is designed primarily to lure institutional investors into this ever-evolving market. What makes the platform unique is that it offers its users zero transaction fees while making use of the “Smart Order Routing” model — which basically allows investors to get the best deals on their purchases. In relation to his company’s latest move, Huobi Group’s vice president for global business, Ciara Sun, said:

“Institutional investors and HNWIs will be the major contributors of growth for the crypto economy in 2020 and beyond, but barriers like low liquidity and a lack of asset enhancement products are stalling widespread adoption.”

Lastly, a spokesperson for Bakkt, a crypto futures trading platform run by the Intercontinental Exchange, announced the release of an all-new consumer app that is designed to support digital assets — including a wide range of cryptocurrencies. With that being said, Bakkt’s president, Adam White, did say that the app will look more like a traditional finance product rather than a crypto fintech one.

Comparing previous WEFs in regard to crypto

On the subject of how this year’s blockchain agenda in Davos compared to ones from previous years, Daniel Haudenschild, the president of the Crypto Valley Association, told Cointelegraph”

“I think the level of discussions is healthy. I think what’s happened is that the content has completely changed. I think anybody still walking around talking about crypto in blockchain now have something to hold on to. There’s something serious behind their intention. There’s no more fluff now because we’ve been through the Valley of Tears and many projects are coming to fruition. It’s exciting. It’s much more real. It’s almost like 2017 but without the hype.”

He further added that 2020 seems primed to be the year of infrastructure development, especially because the market is seeing the entry of better players, institutional investors, and wealth and asset management companies — which is being driven primarily by negative interest rates. Haudenschild also pointed out:

“We are observing a flush of new ASIC classes, tokenized securities, tokenized commodities, digital commodities as well as a rush of people trying to get the infrastructure in place — you know, the custody solutions, the wallets in order to be able to provide those services both on the banking side, but also on the trading end.”

Also in attendance at the conference was Russian author and composer Alexander Shulgin, whose ideas regarding crypto mining have gained a lot of traction in recent years. When asked to expound on the subject, Shulgin told Cointelegraph:

“Decentralized servers in regard to mining can help usher in a bright future for IoT-based technologies, smart cities and for so-called AI because, without computer processing, you cannot do any data mining.”

He further added that this WEF, a lot of conservative businessmen and big companies were taking the time to understand the implications of the forthcoming industry revolution and how it will make local mining easier (by reducing the overall computing requirements) for everyone interested in the business.

In addition to all of the activities taking place as part of the WEF’s core agenda this past week, many other satellite events were also in full swing at the same time — with perhaps the largest of these being the Crypto Valley Week, a series of events organized by CV Labs.

CV Summit on Jan. 23 featured public addresses by a number of high-profile crypto personnel including  MakerDAO’s Rune Christensen, ex-Cambridge Analytica’s Britanny Kaiser and Cardano’s Charles Hoskinson, among others. The topics of discussion ranged from how mainstream finance players can benefit from tokenization to how different countries administer their local crypto markets and beyond.

To get a clearer picture of how much attention the crypto sector has been receiving from people all over the world this past year, Cointelegraph sat down with Cardano’s Hoskinson, who was in attendance at the CV Summit. In his view, Davos presents individuals with tremendous networking opportunities, citing his recent dinner meeting with Guns and Roses drummer Steven Adler as a perfect example of this. He then proceeded to add:

“It’s no longer just a bunch of nerds sitting around talking about code. We’re really talking about solving real-life problems. And generally, the problems are always the same, which is this middleman of necessity that sucks value out of commercial connections between the edges. You have the AirBnbs, the Ubers, the Googles and other platforms like Facebook, where their product is their customer. And basically, they get so powerful that they get to sculpt an entire marketplace.”

Lastly, the week also saw another important conference, TechPark, draw in many famous innovators from all over the world, who discussed artificial intelligence, education technologies, blockchain, Big Data, the Internet of Things, and virtual and augmented reality, among others. Some of the speakers at the event included Jorge Sebastiao, the chief technology officer of Huawei Technologies; Heinz Sommer, the CEO of HSO; Evan Luthra, the CEO of Startup Studio; as well as Cointelegraph’s Kristina Lucrezia Cornèr, who participated in important debates on the role of women in the construction of fintech’s future.

Davos has set the ball rolling in the right direction

Despite the crypto-related announcements at the WEF being met with mixed emotions, a number of experts were happy with the fact that more and more world leaders are at least beginning to recognize the overall potential and utility of this novel tech space. In this regard, Francesco Pierangeli, business development and research associate at UCL Center for Blockchain Technologies, told Cointelegraph that he has witnessed a lot of positive movement taking place within the crypto and blockchain sector over the past year, especially at the WEF:

“There is a lot going on when it comes to regulations, when it comes to which forms of blockchain are going to make an impact on society. And this is really what Davos is all about — how emerging technologies can be integrated into society for good reasons. There is a lot going on. And I believe that the more we discuss these topics, the more this stuff gets on the agenda of key decision-makers of the world.”

Similarly, Jordi Puigneró, Catalonia’s minister for digital policy and public administration, spoke at Tech Dinner — an event organized by CV VC and powered by Cointelegraph. In his speech, Puigneró stated that blockchain will help usher in a new era of governance by empowering citizens and defining new models of trust, similar to how the internet completely revolutionized the way in which people connect and interact with one another. He further pointed out:

“The government of Catalonia has already approved and is deploying a blockchain strategy in which one of the first projects will be deploying a self-sovereign identity for Catalan citizens. Digital identity will be an essential framework from which can be developed many new services of the digital economy.”

The interviews in Davos were conducted by Kristina Lucrezia Cornèr, Cointelegraph’s managing editor and head of features.