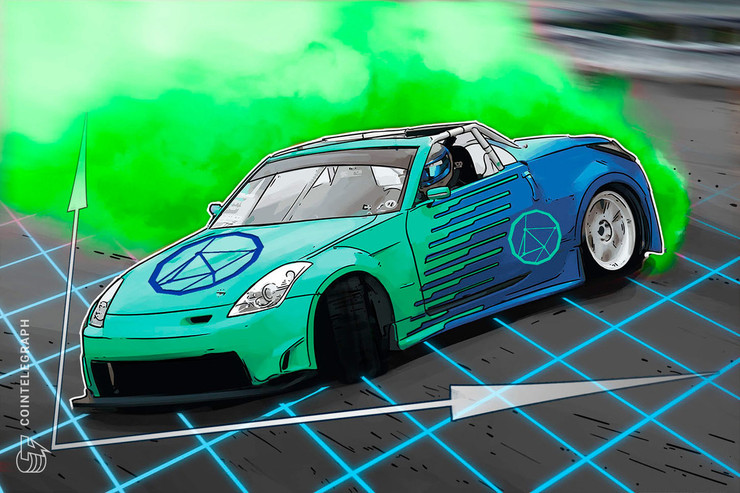 Today Cardano (ADA) broke above its 6-month range and now follows the movements of large-cap altcoins like Bitcoin Cash ABC (BCH), Dash (DASH) and Ethereum Classic (ETC). Does this mean that altcoins are entirely out of the woods?

The 12-hour chart shows that the breakout occurred with a significant amount of trading volume which was the highest measured volume candle since the start of this range.

Such a candle is a strong signal, as the price of an altcoin needs to bottom out in a sideways structure, called the accumulation range. Breaking out of this range with such a high amount of buying pressure is usually a sign that the accumulation phase has ended.

At the moment there is not 100% confirmation of a breakout, but the chart suggests that further upside continuation could occur. For confirmation to occur, Cardano price needs to retest the previous resistance for support to see whether buyers are stepping in at these prices. If that occurs, continuation towards 0.00000645 satoshis and possibly higher is likely to occur.

The USDT chart of Cardano also provides a similar bullish outlook. The price broke a 6-month downtrend, which was followed by a strong surge of 38% (from $0.038 to $0.053). This breakout marked the end of the downward trend and the start of a new uptrend.

An upward trend usually signals positive support/resistance flips, which the chart clearly shows. The price rejected at $0.045 earlier this month, after which support was found at $0.039, then the rally continued.

ADA broke this $0.045 resistance yesterday and immediately followed its path towards the next resistance at $0.053. Currently, Cardano is hovering around this next level of resistance. Traders now believe that a healthy retest of $0.045-0.047 should occur before continuation towards $0.064 can take place.

The altcoin market capitalization of cryptocurrencies is showing a potential bottom formation and uptrend since the start of 2020. An apparent breakthrough of the $65 billion resistance resulted in an upward trend towards $80 billion. This resistance confirmed resistance, after which the market capitalization needed to retest some support levels. This support is found at $72 billion.

An interesting fact from this chart is the significance of the $80 billion level. The level has been tested several times in recent months, which means that a renewed test of this level usually follows a breakthrough. Targets are found at $100 and $113 billion as next resistances.

Bitcoin dominance on the verge of a significant drop

The daily Bitcoin dominance chart is currently hovering below the 67.50-68% level. This level used to be a significant “support” during 2019. After several tests of this level, the dominance fell below this level and might be continuing the dropdown.

The more critical signal from this chart is the lower high at 70.75%. Bitcoin dominance was unable to continue rallying at 70.75% and turned downwards, which could signal a potential downtrend for the Bitcoin dominance.

For now, the eyes are on this 68% level. If the dominance chart breaks back above this level, a continuation of the Bitcoin dominance is likely to occur, which would result in pain for the average altcoin investor.

The primary variable for a potential drop of the Bitcoin dominance is Ether (ETH), so analyzing this cryptocurrency is essential to get a clear view. At the moment Ether is showing bullish signals, as it finally broke a two-year-old downtrend.

This raises the following question:

Do investors need to see a significant surge immediately after breaking out of such a long term downtrend?

The answer is no, as some consolidation is quite likely before a larger surge occurs.

The ETH/BTC daily chart is showing a clear uptrend, as a higher low was made earlier this month at 0.017 satoshis. Right now a significant support/resistance flip is occurring as well. If the price of Ether can hold above 0.0186 satoshis, a surge towards 0.022 and 0.025 satoshis is something traders will keep an eye out for.

Holding above 0.0186 satoshis would confirm an uptrend and flip that resistance for support. Automatically, such a surge would cause Bitcoin dominance to drop significantly.

Cardano wasn’t the only altcoin to break out of a significant sideways range. The same sort of price action can also be viewed with EOS.

EOS price hovered in a sideways range for five months, after which an apparent breakthrough happened earlier this month. Such a breakthrough is quite often followed by a retest of the previous resistance and this took place over the past few weeks, further confirming the breakout as buyers stepped in at this level.

If one thing is clear, it is that altcoins are showing stronger signals of a potential trend reversal. However, the primary variable is still Bitcoin. When Bitcoin price revs up and catches momentum, altcoins usually tend to break downwards in their BTC pairings.

However, given that many altcoins have broken their multi-year downtrends, it’s likely to expect further momentum to the upside.