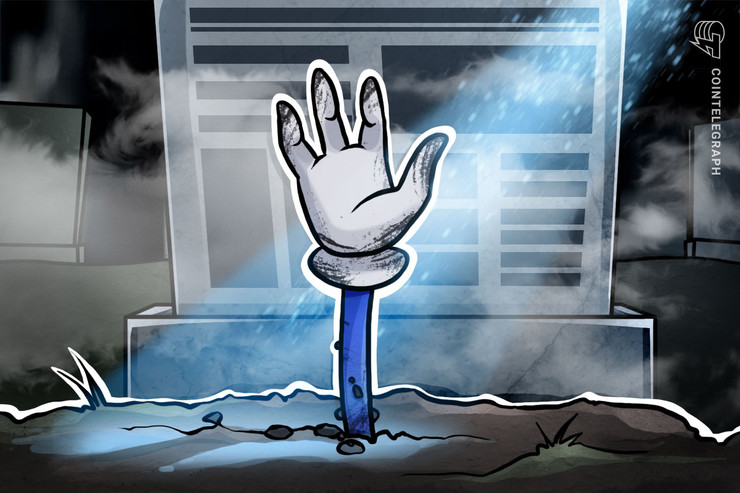 Bitcoin has long been disregarded as a speculative asset class that is doomed to fail by mainstream media outlets around the world.

The apathy toward the world’s preeminent cryptocurrency has been embodied by countless articles that have either hailed the death of Bitcoin or predicted its impending demise.

For the past three years, Cointelegraph has reviewed the top annual Bitcoin obituaries courtesy of 99Bitcoins’ list of news articles that have unwittingly foretold the end of the cryptocurrency.

In 2017, Bitcoin and the overall cryptocurrency market saw the biggest surge in history, when BTC’s value soared to over $20,000 by December of that year. The lofty gains were eventually curtailed by a humbling price correction and stagnation that ensued for much of 2018.

Unsurprisingly, the number of Bitcoin obituaries skyrocketed during those years. In 2017, Bitcoin’s “death” was predicted 124 times, while 2018 saw that number reduced to 93. At the end of 2019, a full decade since Bitcoin’s inception, the number of articles proclaiming the end of the cryptocurrency had fallen to just 40.

In this listicle, Cointelegraph looks at the top five Bitcoin burials of the last year.

Bitcoin will go to zero

The annual World Economic Forum in Davos is a major event in the global financial and banking sphere, and cryptocurrencies have been part of its debates and forums over the past few years.

During a TV debate hosted by CNBC in Davos in last January, Bitcoin’s underlying protocol became a major point of contention in its potential future as a valued cryptocurrency.

BCG Digital Ventures Founder Jeff Schumacher highlighted concerns regarding the way in which Bitcoin derives value from its proof-of-work protocol — suggesting that its value could plummet to $0.

“I do believe it will go to zero. I think it’s a great technology but I don’t believe it’s a currency. It’s not based on anything.”

The debate itself was not centered around an attack on Bitcoin but a robust debate around the future of cryptocurrencies and the power of the protocols that underpin the blockchain technology used to keep them running.

As Bitcoin’s price began to rebound from a lowly start in 2019, an article in Gizmodo slammed the cryptocurrency and people who have invested into the space.

The author of the piece was scathing in his take on Bitcoin as the cryptocurrency bounced back to a four-month high following a difficult market climate in 2018.

“It’s fake money that’s about as practical to use in the real world as Monopoly bills.”

Bitcoin is a “digital game” — a SharkTank investor

In May 2019, renowned investor Kevin O’Leary of SharkTank fame likened Bitcoin to playing a “digital game” in an interview on CNBC’s Squawk Box.

O’Leary’s comments came as Bitcoin was sharply appreciating in value midyear. His major criticism was that investors could not take large sums of value in and out of Bitcoin because buyers demand a guarantee on the value of BTC they’re receiving.

O’Leary made reference to his own efforts to buy real estate in Switzerland using Bitcoin, with the difficulty being that the receiver of such a large amount of Bitcoin is not ready to trade other assets due to the risk associated with BTC’s price volatility.

“To me, it’s garbage, because you can’t get in and out of it in large amounts.”

Buffett — Bitcoin is a “gambling device”

Globally respected investor Warren Buffett, founder of Berkshire Hathaway investment group, has long been a dissenting voice towards cryptocurrencies and Bitcoin in particular.

Earlier this year, Buffett cast fresh aspersions on the space while speaking to the press ahead of his company’s annual meeting.

Buffett went as far as saying that Bitcoin had become a “gambling device” and that the cryptocurrency hadn’t produced anything.

Bitcoin not built to last

An article in the New York Post speculated in June that Bitcoin would not survive in the future, despite another price surge occurring that same month.

The cryptocurrency had jumped up to $13,000, marking a massive increase in value from the beginning of the year, when it was hovering around $3,000.

The author of the article suggested that the surge could have come down to Facebook’s reveal of its Libra cryptocurrency plans, which may have boosted market sentiment in the cryptocurrency sector.

The argument suggested that Facebook’s product is something that provides real value and could be the catalyst that leads to the demise of Bitcoin.

“In fact, it might spell the beginning of the end for bitcoin. There are almost no major Wall Street investors of substance with meaningful track records who have invested in bitcoin. To me, it’s fool’s gold. There are no financial statements, no balance sheets, no revenues or assets.”

Dawn of a new decade

A decline in the number of sweeping statements made about the future lifespan or looming demise of Bitcoin and cryptocurrencies is an interesting development in the space.

The dawn of 2020 brings down the curtain on the first decade of the crypto era. Bitcoin led the way with its inception in 2009, and the space has subsequently exploded over the past 10 years.

Coinbase CEO Brian Armstrong wrapped up his take on the last decade in a blog post early in the new year, in which he vilified the multitude of articles which had inaccurately written off Bitcoin.

“There were over 379 articles written, prematurely declaring the end of Bitcoin. Not only did Bitcoin survive, it thrived, becoming the top performing asset of the decade. The naysayers were proved wrong and we learned an important lesson about human nature: most big breakthroughs are contrarian ideas that people dismiss and ridicule at the start.”

As Armstrong suggests, the success and adoption of Bitcoin birthed an era of innovation that spawned a plethora of cryptocurrency and blockchain projects that have driven the development of the space.

Toward the end of the decade, the interest in the space spilled into mainstream industries. The world’s best investment firms started gaining exposure to crypto while some of the biggest companies began using blockchain technology or developing their own enterprise software and tokens.

A combination of all of these factors may be the reason for the significantly fewer Bitcoin obituaries being published. The focus seems to have shifted to major developments in the space, like Facebook’s Libra cryptocurrency plans and moves by regulators around the world.