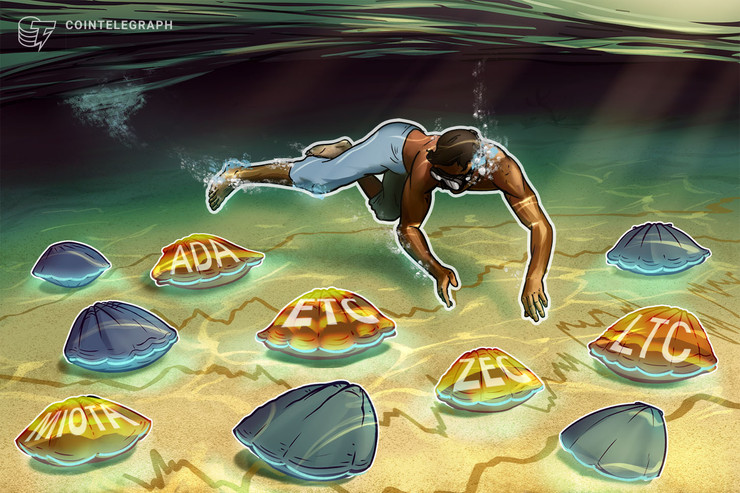 Several major altcoins have outperformed Bitcoin in January 2020. However, with the reward halving just over three months away, Bitcoin might play catch up. During the previous two halvings, Bitcoin rallied just before and after the event. Weiss Ratings believes that history will repeat itself in the upcoming halving and the only question is how high can the rally extend.

Bitcoin’s current technical set up has a variety of social media personalities feeling bullish about the digital asset’s future price action. In a recent market discussion with Cointelegraph, popular YouTubers The Moon (Carl Runefelt) and DataDash (Nicholas Merten) said that Bitcoin has already entered a bull market when viewed from a longer-term time frame. However, Merten said that a parabolic move is unlikely to start until Bitcoin rises above $20,000.

LVC Corporation, the crypto subsidiary of Line, plans to launch trading of its LINK digital currency in Japan from April of this year. Although LINK started trading on Line’s international BITBOX cryptocurrency exchange in mid-October 2018, LVC had to wait for the Japan launch due to the strict national cryptocurrency regulations in the country.

In other news, Twitter has added the Bitcoin emoji, which will show up if the user writes Bitcoin or the BTC hashtag. This new addition was the result of Twitter co-founder and CEO Jack Dorsey suggesting that Unicode, the consortium managing the character standard, include the symbol in its text encoding standard.

So far the top crypto performers of this week have all risen more than 25%, which shows that they are backed by momentum but for long can bulls keep it up? Let’s analyze the charts to see what next week has in store for investors.

Ethereum Classic (ETC) is the top performer with a stellar run of about 32% in the past seven days. The network hashrate of ETC hit a new lifetime high recently and has been able to sustain it, which is a positive sign.

The bulls struggled to push the price above the overhead resistance at $10 for the past two weeks. However, the positive thing was that they did not give up much ground, which showed that the bulls were confident of a further rise.

This week, the ETC/USD pair resumed its rally and broke above $10. The sharp up move carried the price to an intra-week high of $12.87278, which is just below the overhead resistance at $14.

The break above $10 has a target objective of $16.60. Though there is a minor resistance at $14, we expect it to be crossed. If the momentum is strong, the rally can extend to $19. However, as RSI is in the overbought zone, the pair might consolidate or enter a minor correction before breaking above $14.

Our bullish view will be invalidated if the bears sink the price back below the support at $10. Such a move will indicate a lack of buyers at higher levels.

Litecoin (LTC) has seen a sharp rally of about 31% in the past seven days. This move culminated a strong month for the altcoin where it surged about 65% from the lows. This rally has stoked interest among the market participants because, in 2019, LTC had risen about 350% from January to June.

The LTC/USD pair will complete a rounding bottom formation if it closes (UTC time) above $66.1486 on the weekly candlestick. This pattern has a target objective of $96.439.

However, it is unlikely to be a straight dash towards the target level. The bears are likely to defend the zone between the 50-week SMA at $73 and $80.2731. If the price turns down from this resistance zone, a retest of the breakout level at $66.1486 is possible.

If the retest is successful, it might offer a low-risk buying opportunity to the traders. Our bullish view will be invalidated if the bears sink and sustain the price below $66.2486. Such a move will indicate that the current breakout is a bull trap.

Cardano (ADA), with a rally of about 31% is the third-best performer. During the week Cardano co-founder and CEO of IOHK Charles Hoskinson announced a partnership with PriceWaterhouseCoopers (PwC) to build a new commercial strategy. This news was cheered by the market participants and the price of ADA surged.

In an interview with Cointelegraph, Hoskinson claimed that once all the upgrades of the protocol are implemented, Cardano would become the most decentralized cryptocurrency in the world.

The pair has closed in the green for the past five weeks. This shows that bulls are in command. However, the sharp rise in the short-term indicates that the price might have run up too far too soon. Therefore, we anticipate the pair to face stiff resistance in the $0.0560221 to $0.065229 zone.

The price might dip to the breakout level of $0.0461161, which might offer a low-risk buying opportunity. Our bullish view will be invalidated if the price breaks down and sustains below $0.0461161. However, we give this a low probability of occurring.

IOTA (MIOTA) rallied by about 29% in the past seven days to take up the fourth spot among top performers. Bittrex Global added support to the IOTA token this week.

Our bullish view will be invalidated if the price turns down from the current levels or the overhead resistance and plummets below $0.244553. However, we give this a low probability of occurring.

Zcash (ZEC) rallied roughly 26% this week to make the list in fifth place. The Zcash community has approved Zcash mining reward changes that will take effect in November of this year during the coin’s halving.

The ZEC/USD pair has been rising for the past four weeks. Though bears attempted to stall the relief rally at the 50-week SMA, the momentum this week has pushed the price above it.

However, if the bulls fail to sustain the price above $66.1326, the pair might again dip to $45.67, which is likely to act as a strong support. If the price bounces off this support, the bulls will attempt to resume the up move. Our bullish view will be invalidated if the bears sink the price below $45.67.