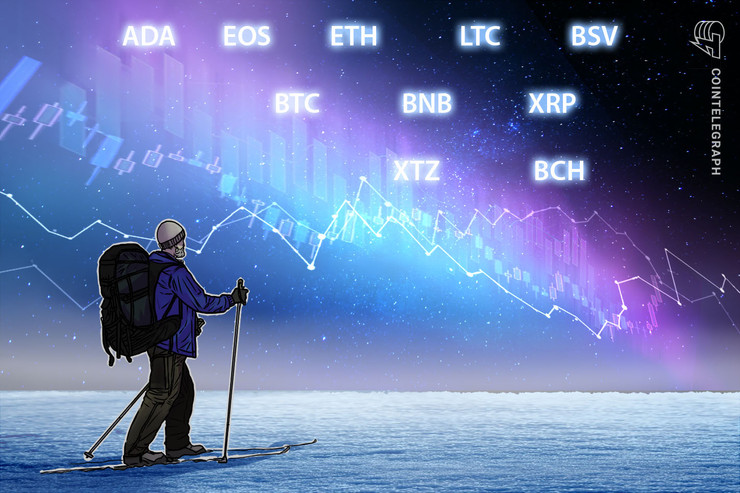 Although Bitcoin has rallied about 33% year-to-date, its dominance has dipped to 64.40%,  its lowest level since July 2019. This shows that altcoins have continued to outperform Bitcoin. However, with the Bitcoin halving fast approaching, the digital asset’s volatility is likely to pick up.

Tom Lee, co-founder at Fundstrat Global Advisors, has again turned ultra bullish on Bitcoin and expects a rally to about 200% in the next six months. According to him, historically, whenever Bitcoin has broken above its 200-day moving average, it has recorded an average six month gain of 197%. Lee expects halving to act as a catalyst for the expected up move.

While we agree that anything can happen in the crypto markets, we believe that Bitcoin will have to scale several stiff resistances before it reaches its lifetime highs. Until it breaks above the lifetime highs and goes into unchartered territory, it will not show the kind of momentum it did in 2017.

Therefore, traders should be cautious and should take informed decisions without getting carried away by lofty targets. Let’s analyze the charts to locate the critical levels to watch out for.

Bitcoin (BTC) dipped below the support of the tight $9,200 to $9,600 range on Feb. 4. However, the bears could not build up on the breakdown. This shows that bulls continue to buy the dips. The upsloping moving averages and the RSI in positive territory suggest that bulls are in command.

Today, the buyers have carried the price close to the top of the range and then set a new 2020 high at $9,744. The breakout of this tight range is a positive sign and it suggests the BTC/USD pair can rally to $10,360.89, which is likely to act as a stiff resistance.

Ether (ETH) is looking strong. The bulls purchased the minor dip on Feb. 4 and have today pushed the price above the overhead resistance at $197.75. If the bulls can sustain the price above this level, the altcoin is likely to pick up momentum.

Above $197.75, the rally can extend to the next resistance at $223.999 and above it to $235.70. Both moving averages are sloping up and the RSI is in the overbought zone, which suggests that bulls are firmly in command. The traders can trail the stops on the remaining long positions to $180.

If the bulls fail to sustain the price above $197.75, the ETH/USD pair will lose momentum. The pair will turn negative on a break below the strong support at $173.841.

XRP has picked up momentum since bouncing off the 20-day EMA on Feb. 2. This shows that as price moves higher, the bears are throwing in their towel. The upsloping 20-day EMA and RSI in the overbought zone indicate that bulls are in command.

The next target to watch on the upside is $0.28132, which is the target objective of the inverted head and shoulders pattern. If the bulls can sustain above this level, a rally to $0.31503 will be on the cards.

Our bullish view will be invalidated if the XRP/USD pair turns down from the current levels and breaks below $0.2326. The traders can trail the stops on the long positions to $0.23.

Bitcoin Cash (BCH) has broken out of the overhead resistance at $403.88 with a sharp rally today. This shows that the bulls have asserted their supremacy. There is a minor resistance at $440 above which, the up move can extend to $500.

The current breakout has negated the developing negative divergence on the RSI, which is another positive.

Contrary to our assumption, if the bulls fail to sustain the higher levels, the BCH/USD pair might again dip to the recent support at $360. A break below this support will turn the trend in favor of the bears.

Bitcoin SV (BSV) has bounced off the support line of the symmetrical triangle. This shows that the bulls are defending this level aggressively. They will now attempt to carry the price above the resistance line of the triangle.

Conversely, if the BSV/USD pair turns down from the current levels and plunges below the triangle, a drop to $236 is possible. We expect the buyers to defend this support aggressively.

Litecoin (LTC) bounced off the breakout level of $66.1486 on Feb. 4, which is a positive sign. It shows that the bulls are defending this level aggressively. If the price can sustain above the minor resistance at $73.5259, a rally to $80.2731 is possible.

Our bullish view will be invalidated if the price reverses direction from the current levels and slides below the strong support of $66.1486.

The tight $4 to $4.40 range in EOS has resolved to the upside. This shows that the bulls have overpowered the bears and the uptrend has resumed. The next level to watch on the upside is $4.8719.

We expect the bears to defend the overhead resistance at $4.8719 aggressively. However, if the momentum carries the EOS/USD pair above this level, a move to $6 is possible.

The only bearish setup on the chart is the negative divergence on the RSI. If the price turns down from the current levels or from the overhead resistance and plunges below $4, it will turn the tide in favor of the bears.

The bulls are attempting to sustain the price above the overhead resistance at $19. If successful, Binance Coin (BNB) can rally to $21.80. Both moving averages are sloping up and the RSI is in the positive territory, which suggests that bulls are in command.

Contrary to our assumption, if the price fails to sustain above $19, it will signal a lack of demand at higher levels.

The BNB/USD pair will weaken below the 20-day EMA at $17.7 and the trend will turn bearish on a break below $16.50. Therefore, traders can retain the stops on the long positions at $15.90. The stops can be trailed higher after the pair sustains above $19.

Cardano (ADA) is attempting to resume the uptrend. If the price sustains above $0.586027, a move to $0.065229 is likely. With both moving averages sloping up and the RSI in overbought territory, the advantage is with the bulls.

The bears are likely to defend the overhead resistance at $0.065229 aggressively. However, if the bulls can propel the price above this level, a rally to $0.08 will be on the cards. For now, the traders can retain the stop loss on the remaining long positions at breakeven.

Our bullish view will be invalidated if the ADA/USD pair reverses direction and plummets below $0.052. Such a move will indicate a lack of buyers at higher levels.

Tezos (XTZ) pulled back to the breakout level on Feb. 4, which was a buying opportunity for the traders, as suggested in our previous analysis. The altcoin has resumed its up move with a sharp rally today.

The XTZ/USD pair can now move up to its target objective of $3.35. However, it is unlikely to be a straight dash to the target. The pair might face resistance at $2.5 and above that at $2.90.

Although the deeply overbought reading on the RSI indicates strong momentum, it also suggests that the rally has been too sharp in the short-term and a pullback or consolidation is possible. A break below $1.85 will invalidate our bullish view.