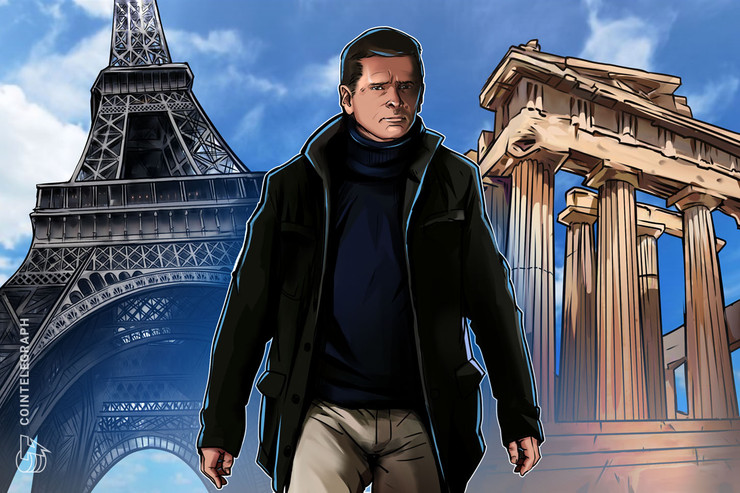 Vinnik also has pending extradition requests from both Russia and the United States. The alleged Bitcoin criminal has previously stated his preference for extradition to his native homeland, which Greek officials have turned down.

Thus, after the conclusion of his trial in France, Vinnik will return to Greece to face another extradition to the U.S. The U.S. State Department reportedly wants to question Vinnik in connection with the Mt. Gox hack and subsequent theft of 300,000 BTC allegedly traced to Vinnik’s personal crypto wallet. Reports also suggest that Russian state agents funneled money through BTC-e to fund interference in the U.S. 2016 presidential elections.

Amid the three-way diplomatic tussle, Vinnik’s legal team said that its client has been subjected to gross human rights abuses. Vinnik’s lawyers have also accused prosecutors of working to keep their client in detention without charges or a trial while preventing him from having any contact with members of his family.

Vinnik’s defense lawyers also allude to the prosecution being sponsored by political and business interests based on their client’s involvement in crypto and blockchain technology. The former BTC-e chief is one of a few crypto personalities to have run-ins with the law, much like Silk Road creator Ross Ulbricht, who is currently serving a double life sentence for running a darknet drug market.

In a phone call with Cointelegraph, Zoe Konstantopoulou, one of Vinnik’s lawyers, leveled allegations of human rights abuses against the Greek authorities. Commenting on the scale of these infringements, Konstantopoulou revealed:

“Alexander has been subject to arbitrary detention for 30 months, which is prohibited by the Greek constitution. During this period, he has been made to suffer cruel and inhuman treatment from the authorities.”

According to Konstantopoulou, Vinnik is being held without trial or charges and in the absence of any court orders. Konstantopoulou has also claimed that the case against Vinnik has some political undertones with vested interests in Greece, France and the U.S. looking to punish the former BTC-e operator.

When asked about the effect of these alleged maltreatments on Vinnik’s health, Konstantopoulou revealed that the health status of the Russian national continues to deteriorate. “Alexander is currently on the 44th day of his hunger strike in protest of the gross human rights violations suffered at the hands of the authorities in Greece,” she revealed during a call with Cointelegraph.

Apart from the alleged maltreatment, Vinnik’s lawyer also revealed that Greek law enforcement was preventing any contact between the former BTC-e operator and his family. According to Konstantopoulou:

“Greek law enforcement isn’t allowing Alexander to see his family, even his wife who has been diagnosed with brain cancer.”

In a private note to Cointelegraph on the Vinnik case, Yusaku Senga, CEO of cross-blockchain swap platform Swingby, said crypto personalities accused of wrongdoing usually suffer harsher punishments than their counterparts in mainstream finance. According to Senga:

“If we look at the prosecution of Charlie Shrem and compare it level of prosecution brought against Goldman Sachs and its senior directors for their involvement in the huge scale of money laundering and embezzlement in the 1MDB scandal in Malaysia, it’s hard not to argue that crypto advocates and entrepreneurs are being much more harshly persecuted.”

Like Vinnik, Charlie Shrem was also associated with another crypto exchange, BitInstant. U.S. authorities arrested Shrem in 2014, charged him with money laundering and sentenced him to two years in prison.

In July 2017, Greek police arrested Vinnik while on vacation with his family in the tourist village of Ouranoupoli. Thus began the over two-year legal battle that has kept the Russian national behind bars while three different nations jostle for Vinnik’s extradition so he can face criminal charges.

Shortly after his arrest, the U.S. filed an extradition request and seemed to be successful in pushing for Vinnik’s transfer stateside. By September, officials in Moscow also requested Vinnik’s extradition to Russia. 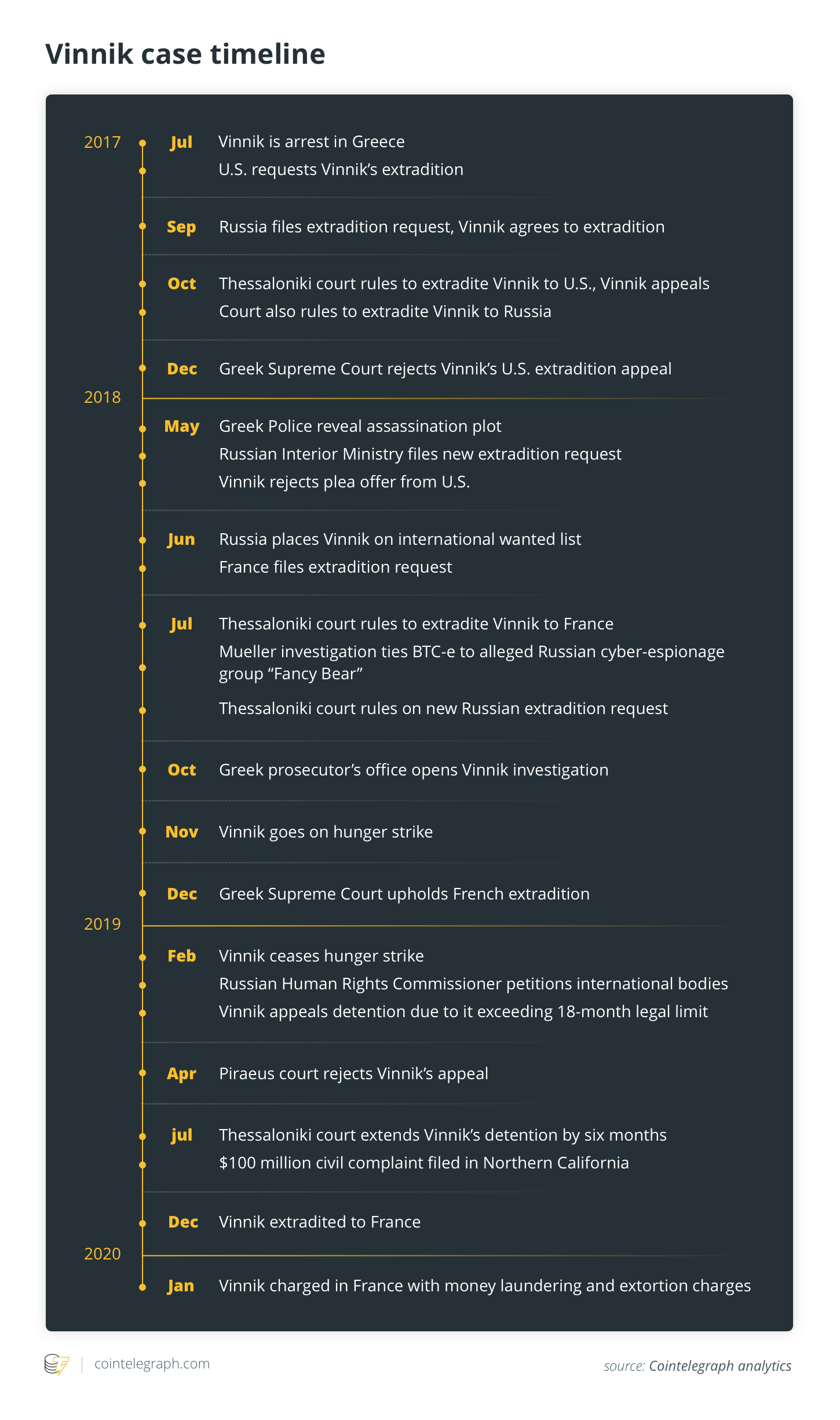 By 2018, France entered the fray, turning the case into a diplomatic three-way tussle. Greek police also revealed an assassination plot with suspected Russian criminals reportedly intent on stopping Vinnik’s return to the country.

In mid-December 2019, Greek judicial authorities finally moved to extradite Vinnik to France to await trial. At the beginning of the year, Vinnik’s case entered a new phase with his extradition to France. Authorities in the country have already leveled money laundering and conspiracy charges against him.

Vinnik’s legal troubles stem from his alleged involvement in the BTC-e crypto exchange. Launched in 2011, the defunct platform saw little in the way of crypto trading activity until Mt. Gox — the market leader at the time — fell into financial trouble following one of the biggest Bitcoin exchange hacks in history.

With Mt. Gox out of the way, BTC-e grew exponentially, accounting for about 15% of all U.S. dollar-denominated Bitcoin trading activity by late 2016. Despite being a major player in the crypto trading space at the time, BTC-e had little in the way of Know Your Customer and anti-money laundering protocols.

Thus, the platform reportedly became a popular channel for funneling “dirty money.” Mt. Gox hackers allegedly used the exchange to launder 300,000 BTC, the exact amount of which was also found in Vinnik’s wallet.

Apart from the money laundering, several law enforcement authorities say BTC-e replaced Silk Road as the channel for illicit deals with many users of the platform engaging in drug trafficking and sales of other banned or regulated goods.

Crypto critics usually espouse the same rhetoric of digital currencies as being channels for online criminal activities. Many financial regulators and governments opposed to or keen on strictly regulating the cryptocurrency industry usually tout the same refrain of digital currencies enabling tax evasion, money laundering and terrorist financing, to mention a few.

The counter-argument offered by crypto proponents is that Bitcoin and other cryptocurrencies only account for a small portion of global financial crimes. A January 2020 report by blockchain analytics firm Chainalysis revealed that crypto payments on the darknet accounted for 0.08% of all digital currency transactions in 2019.