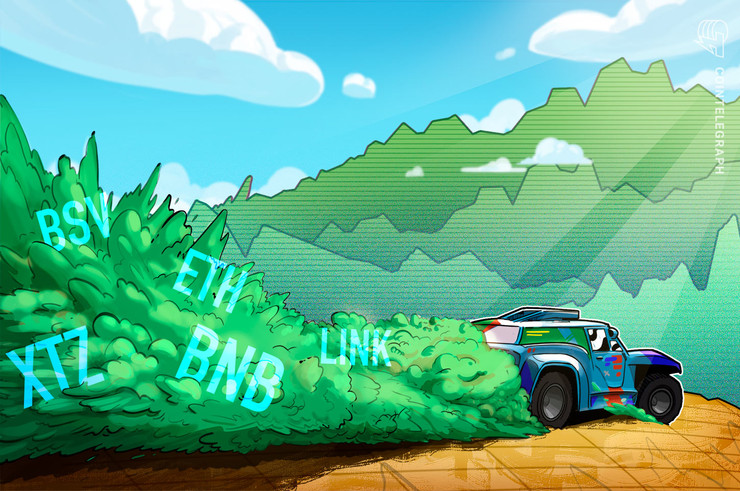 Bitcoin has extended its strong run this year by a move above the psychologically critical level of $10,000. The positive sentiment in Bitcoin is leading the crypto space higher. In 2020, most major altcoins have been outperforming Bitcoin, which shows investor interest has picked up in them once again.

However, the focus of the crypto industry remains on the forthcoming Bitcoin halving. Coinbase believes that the supply rate reduction will further cement Bitcoin’s position as digital gold and it will act as a rival to gold in the digital age.

American provider of investment data Weiss Ratings has also upgraded its rating for Bitcoin to A- due to “improving fundamentals and positive price action ahead of Bitcoin’s next halving.”

Morgan Creek Digital co-founder & partner Anthony Pompliano believes that Bitcoin has started its journey towards his target objective of $100,000 by the end of the Dec. 2021. BitMEX Co-Founder & CEO Arthur Hayes is also bullish but he wants a measured move up. He tweeted: “Slow and steady wins the race. Let’s take the staircase up to #bitcoin $20k.”

With bullish voices all around, do the technicals of the top performers also point to a further rally? Let’s analyze the charts to find out.

Tezos (XTZ) is the top performer of this week with a rally of above 40%. The altcoin has been an outperformer in 2020 as it has rallied about 77% year-to-date. Can it build on its momentum? Let’s study its chart.

The XTZ/USD pair recently completed the breakout of an ascending triangle pattern. This setup has a minimum target objective of $3.35. However, we anticipate the up move to face resistance at $2.50 and above it $2.90.

Due to the sharp rally of the past two weeks, the RSI has entered into the overbought zone, which points to a possible consolidation or a minor correction in the next few days.

Usually, after the breakout of a pattern, it is seen that the price retests the breakout levels. In this case, a retest of $1.85 is possible. If this retest holds and the price bounces off it, a low-risk buying opportunity opens up. Our positive view will be invalidated if the bears sink and sustain the price below $1.85.

Binance Coin (BNB) has made an entry into the top performers’ list after a long time. Several fundamental events this week received a thumbs up from the traders. Binance launched futures trading for Zcash (ZEC) and BNB this week.

The exchange added support for the Russian ruble, which allows the users to make the purchases using their Visa banking card. Binance hired Iskander Malikov, former chief operating officer at TradingView, as the new director of fiat to boost its fiat-to-crypto gateways.

The market participants also seem excited about a new product called Binance Cloud that is expected to be unveiled in the next few days. Can these developments boost prices? Let’s study the chart.

The sharp up move of this week scaled above the overhead resistance at $18.50 and $21.80. This shows that the BNB/USD pair has picked up momentum. The price has reached $23.5213, which is likely to act as a stiff resistance.

If the price turns down from the current levels but does not give up much ground, it will increase the possibility of a breakout above $23.5213. A breakout above this level is likely to start a new uptrend. The first level to watch on the upside is $32 and above it a retest of the lifetime highs is possible.

However, if the price reverses direction from the current levels and sinks below $20, the pair might extend its stay inside the $18.50 to $23.5213 range for a few more days.

Bitcoin SV (BSV) completed a scheduled upgrade named Genesis, which has removed the default hard cap for block sizes. Now, it is up to the miners to manage the consensus of block size and transaction capacity on the network.

Similar to the positive rumblings about the forthcoming Bitcoin halving, BSV’s price is also showing a positive movement before its upcoming halving in April.

After two weeks of consolidation, the bulls are attempting to resume the uptrend. This shows that the dip from $458.74 to $244.34 did not scare away investors. The buyers purchased the retest of the breakout level of $255.62, which was its previous high.

Though the price broke above the overhead resistance at $337.80 this week, the bulls are struggling to sustain the higher levels. This shows that some investors who are stuck at higher levels are offloading their positions.

If the price stays below $337.80, the BSV/USD pair might remain range-bound for a few more weeks. However, if the bulls can sustain the price above $337.80, a rally to the lifetime highs at $458.74 is possible. The RSI remains in the overbought zone, which warrants caution.

Ether (ETH) rallied about 17% in the past seven days and turned out as the fourth-best performer. In an Ask Me Anything session, Danny Ryan from Ethereum Foundation said that he expects Ethereum 2.0 — Phase 0 to “launch by July 30, 2020 (the 5th anniversary of Ethereum 1.0).”

Can the price action remain bullish leading up to the transition from proof of work to proof of stake? Let’s study the charts to find out.

The up move in the ETH/USD pair picked up momentum this week and broke above the resistance at $197.75. We anticipate the bears to mount a strong defense at $235.70. If the price turns down from this level, it might remain range-bound between $235.70 and $197.75 for a few days.

However, if the bulls succeed in breaking and sustaining the price above $235.70, the pair is likely to rally to the $318.238 to $366 resistance zone as there is no significant roadblock in between.

On the downside, the bulls will hold the advantage as long as the price remains above $197.75. A break below this level will turn the trend in favor of the bears.

Chainlink (LINK) rounded up the top 5 performers with a move of about 15% in the past seven days. Does its chart project a further move higher? Let’s see.

The LINK/USD pair has broken out of the large range it had been stuck in for the past few months. This shows that the bulls have overpowered the bears and they continue to buy at higher levels.

Our bullish view will be invalidated if the bulls fail to sustain the price above $3 and the price dips back below it. In such a case, the pair might extend its consolidation for a few more weeks.

Hodlnaut works with potential buyers to sell firm and FTX claims: Report
Why did Bitcoin price go down today? BTC traders brace for $23K retest
Fantom’s 5-week winning streak is in danger — Will FTM price lose 35%?
What are phygital NFTs, and how do they work?
Lack of liquidity mitigated damages to BonqDAO exploit: Report