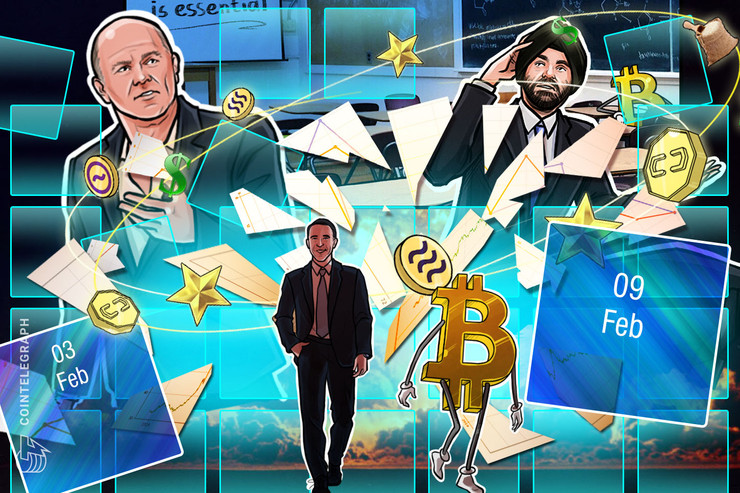 We’re back in business! Bitcoin has reached five figures for the first time since last October. According to Coin360, BTC is up by more than 40% year to date — 8.3% over the past week. Champagne corks will also be flying in the Ether community, as the coin is up 21% to near $230 — a new 2020 high. But as the world’s biggest cryptocurrency returns to five figures, some believe there’s increasing potential for Bitcoin to lose value in the short term. Alameda Research co-founder Sam Bankman-Fried believes BTC may only continue appreciating if the coronavirus crisis worsens — and predicts it will slip back to $6,800 without “continued unrest.” Have global events been responsible for Bitcoin’s remarkable start to 2020?

A member of the United States Federal Reserve’s board of governors has hinted that the institution is warming to the idea of central bank digital currencies. Lael Brainard, who chairs, said the Fed is “conducting research and experimentation” into CBDCs — and wants to be at the forefront of the debate given the dollar’s important role in global markets. This is a marked departure from less than 18 months ago when she said: “There is no compelling demonstrated need for a Fed-issued digital currency.” Of course, a lot has happened since then — including Facebook’s plans to launch Libra. In other news, it’s emerged that six major central banks are going to meet in April to discuss the development of CBDCs. Even though these talks will take place in Washington, D.C., the U.S. will not be attending — only representatives from the European Union, United Kingdom, Canada, Japan, Sweden and Switzerland will be around the table.

When Facebook unveiled plans to launch a stablecoin, one of the most exciting elements was how major financial institutions such as Mastercard, Visa and PayPal were founding members of the Libra Association. Alas, all three quit a few months later with no proper explanation. Now, we’re starting to get answers. Mastercard’s CEO Ajay Banga, speaking to the Financial Times, attacked Libra for its lack of transparency. He said he also had concerns surrounding the stablecoin’s business model because the association hasn’t made clear how it will make money — and that the Calibra wallet didn’t seem to tally with Libra’s vision of serving as a financial inclusion tool. Nonetheless, Banga said he liked the idea of a global currency, describing siloed systems in a world where citizens travel globally as “really stupid.”

Now, here’s a mysterious tale. Some users of Coinbase are apparently not allowed to withdraw more than $10 a day. One Redditor said he had been subject to the limit, and that the company had denied his request to have it raised. Some of those who replied to the thread predicted that further restrictions could follow if crypto prices reach an all-time high. Cointelegraph asked Coinbase for an official statement on the matter, but, at the time of writing, no response has been forthcoming. 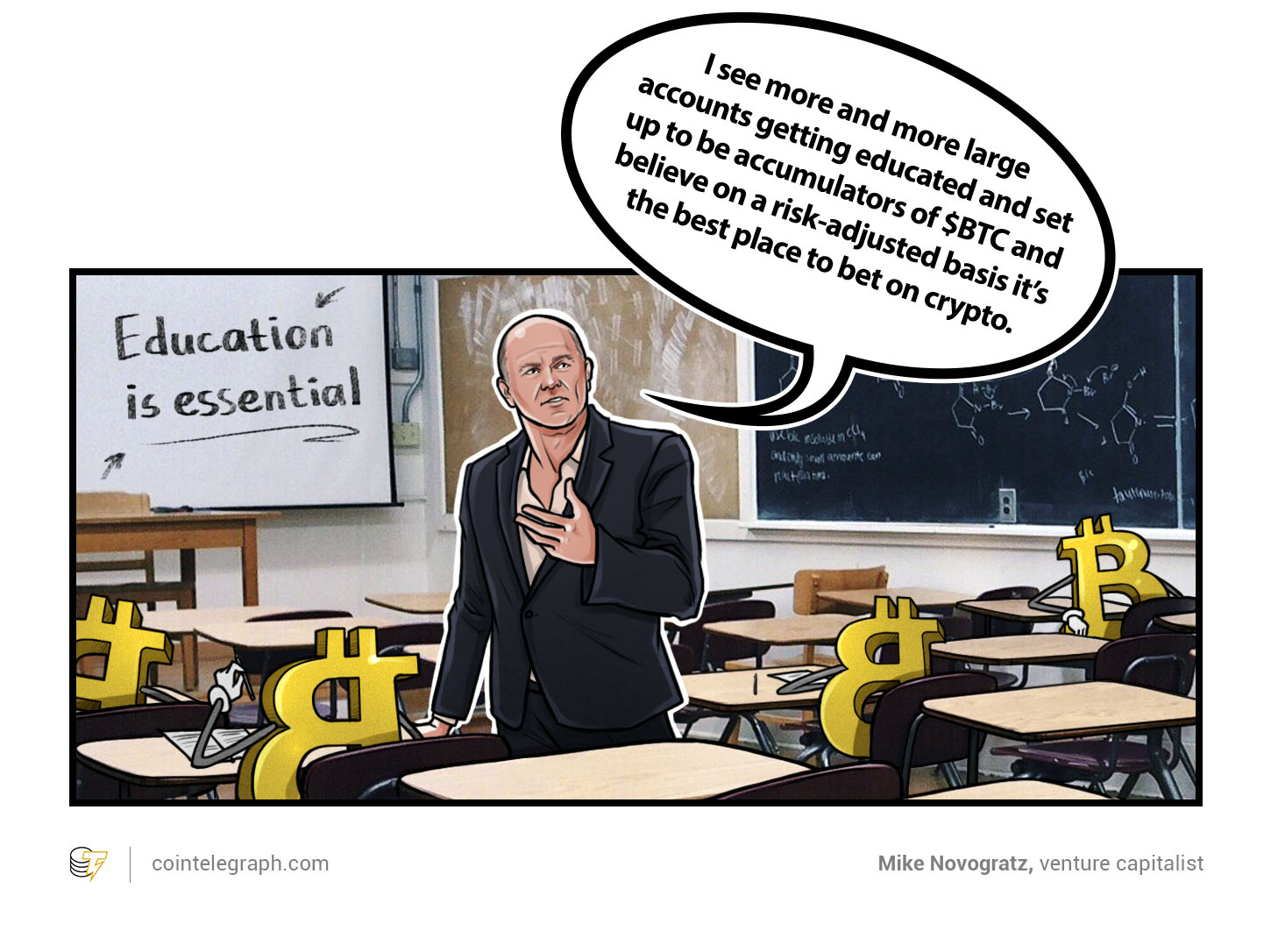 And a happy story to end our news round-up. Tron founder and CEO Justin Sun has finally had his charity lunch with billionaire Warren Buffett. Back in June, Sun had won an auction for the honor on eBay with a bid of $4.5 million — a record. However, the buffet with Buffett was pushed back by Sun due to medical reasons. After the pair broke bread in Nebraska, Sun said he was grateful for Buffett’s “wisdom and vision.” He added: “I’ll always remember his kindness and support and will take Mr. Buffett’s advice and guidance to make Tron a better ecosystem, business with all the partners in the blockchain space and beyond.” 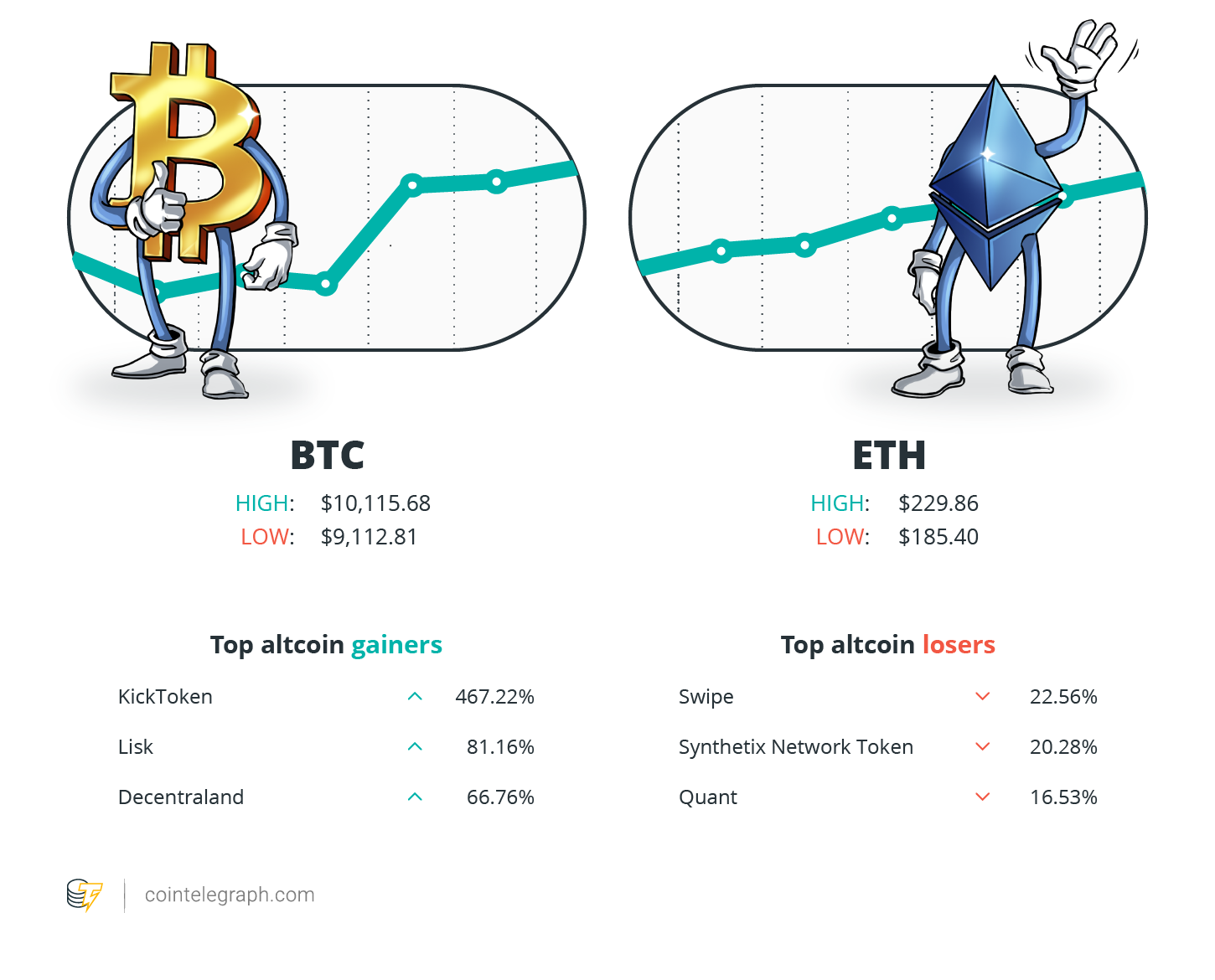 “I see more and more large accounts getting educated and set up to be accumulators of $BTC and believe on a risk-adjusted basis it’s the best place to bet on crypto.”

“It was really an honor, and I’m grateful for Mr. Buffett’s dinner, wisdom and vision.”

“The most important part of Bitcoin, when it comes to the global hedge, is the fact that it’s a non-correlated asset — meaning that, as stocks go up or down, Bitcoin doesn’t have correlation to that.”

“As anyone who’s a trend follower knows — when you’re back above your 200-day, you’re back in a bull market. Whenever Bitcoin breaks back into its 200-day, its average six-month gain is 197%.”

“If you get paid in Libra […] which go into Calibras, which go back into pounds to buy rice, I don’t understand how that works.”

Fundstrat Global Advisors co-founder Tom Lee believes Bitcoin’s best days are ahead. He told Yahoo Finance that he is “really optimistic” about the cryptocurrency’s short-term potential — primarily because it has gone back above its 200-day moving average. Lee claimed that this usually signals the return of a bull market, adding: “Whenever Bitcoin breaks back into its 200-day, its average six-month gain is 197%.” The investor firmly believes that May’s block reward halving will serve as a catalyst for further gains — and has previously said this event has not been “priced in.” Only time will tell whether he’s right. 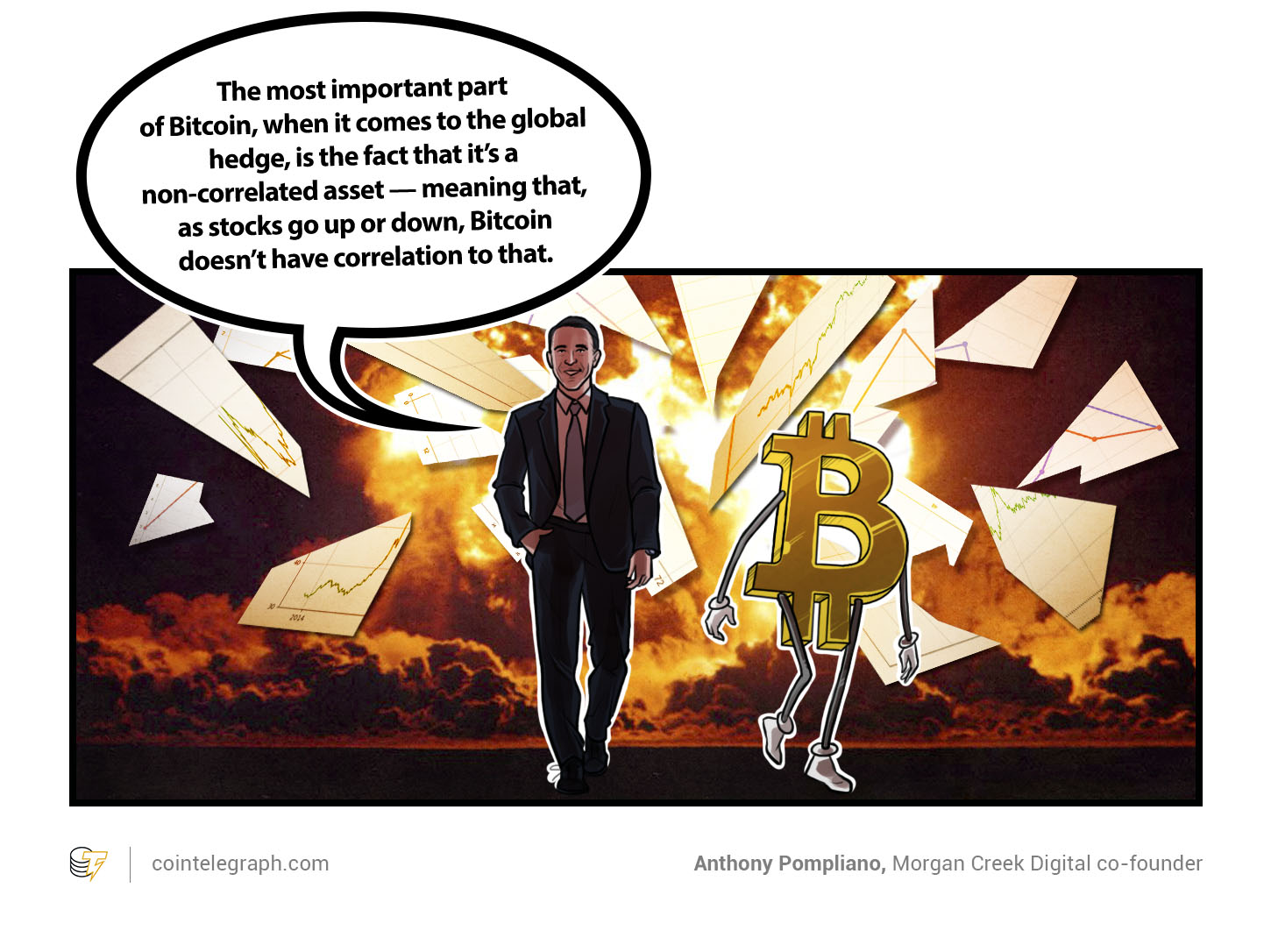 Two men have been charged over an alleged crypto Ponzi scheme that duped an unknown number of investors — including professional basketball players. John Michael Caruso and Zachary Salter are accused of wooing their victims by posting about their supposed luxurious lifestyles on social media. It’s claimed that more than 90 people have been swindled out of at least $7.5 million since June 2018. Forensic accountants believe none of the money taken from investors was actually invested in cryptocurrency. Instead, $350,000 was spent on luxury car rentals, and the pair are said to have lost $830,000 during a 134-hour gambling spree at casinos in Las Vegas.

North Korea’s Lazarus Group managed to steal from the DragonEx crypto exchange by creating a fake but realistic trading bot, according to Chainalysis. The sophisticated attack saw the cybercriminals create a compelling website and social media presence for a non-existent company called WFC Proof. The supposed firm offered software to employees of the Singapore-based exchange that was eventually installed on a machine that contained the private keys to DragonEx’s hot wallet. An estimated $7 million in various cryptocurrencies was subsequently taken. In a rather ironic twist, the WFC Proof website had warned visitors not to let anyone access personal private keys.

The counsel for the estate of Dave Kleiman has accused self-proclaimed Bitcoin inventor Craig Wright of abusing attorney-client privilege to withhold documents and confuse trial proceedings. The long-running case relates to allegations that Wright misappropriated more than 1 million BTC that the pair had mined together between 2009 and 2013. A memorandum said: “To say discovery in this case has been challenging would be a dramatic understatement.” It also alleges that Wright has shown a “pattern of obfuscation,” with tens of thousands of documents being shielded from the plaintiffs. 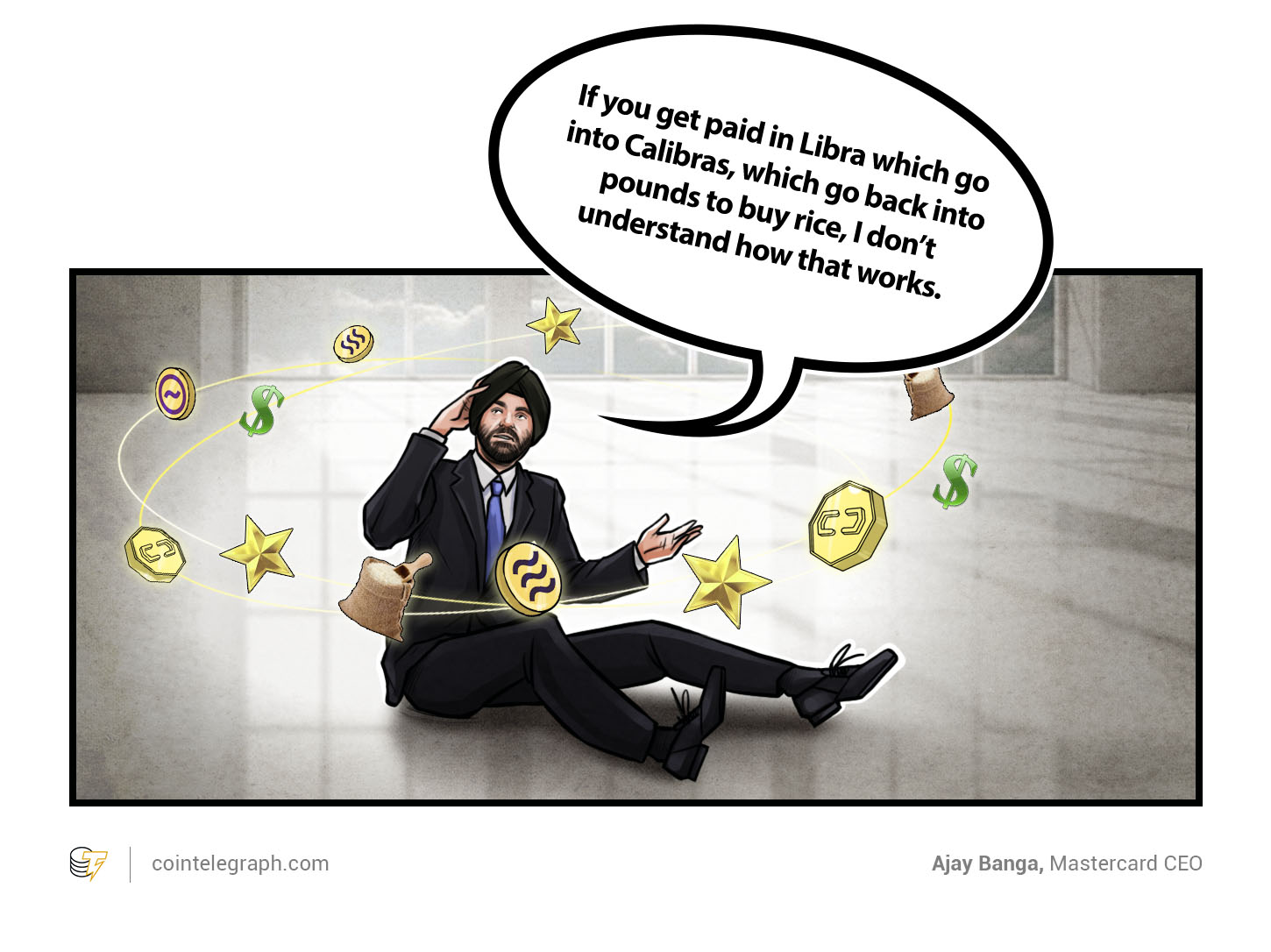 As Joseph Birch explains, 2020 could be the year that crypto companies step forward and take the plunge into going public.

Check out our list of the most important and influential people in the cryptocurrency and blockchain world, as chosen by Cointelegraph’s editors.

After 30 months in detention, alleged Bitcoin money launderer Alexander Vinnik has been extradited from Greece to France. Osato Avan-Nomayo takes a closer look at the case.