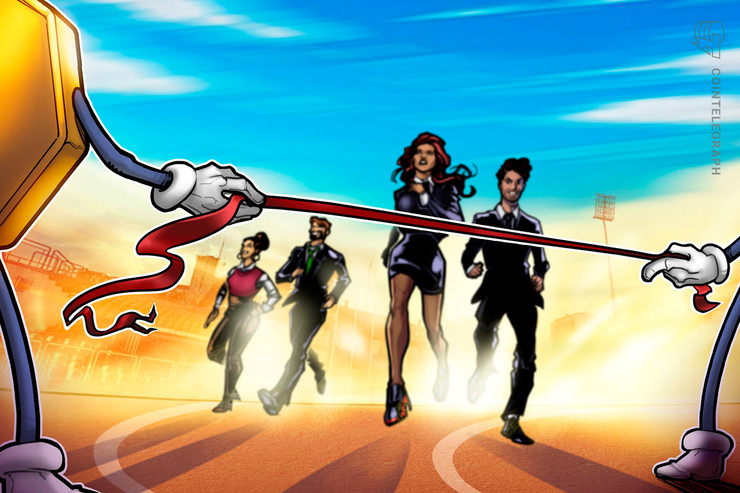 Last year was an interesting one for blockchain and cryptocurrency, contrasting with past years in ways that go far beyond mere finance. It was a banner year for the maturation of the whole space, and not just in terms of the dollar price of your favorite cryptocurrency. Instead, 2019 has proven to those paying attention that blockchain is more alive than ever, and is exemplified by the growing sector’s most impressive and active participants.

Gemini – Owned and operated by Cameron and Tyler Winklevoss, Gemini was already one of the most popular global cryptocurrency exchanges, but has really pushed the envelope in 2019 by expanding its arsenal of financial tools. A notable splash was made in the industry after the launch of Gemini Custody, its solution that allows institutional investors to safely hold crypto assets offline and trade them instantly.

This combination of segregated, multi-signature offline security and limitless liquidity contributes to a more native solution for institutions, according to Gemini Managing Director of Operations Jeanine Hightower-Sellitto:

“Institutional investors have demonstrated a clear and growing demand for crypto, but they’ve struggled to find a solution that fully meets their complex regulatory and security requirements.”

Maker/DAI – One of the most impressive examples of decentralized technology that currently exists, the DAI stablecoin and its governing body, the Maker Decentralized Autonomous Organization has grown in transaction volume since 2018 from six figures daily to over $10 million at its lowest point in 2019. The collateralized lending network is fully peer-to-peer, and there is nowregularly over $100 million locked into the foundation supporting this dollar-pegged token.

When considering that Maker is slowly dialing down its hold on nearly 50% of the ETH locked into decentralized finance, MakerDAO Business Development guru Gustav Arentoft says:

“It really depends on what you look at as dominating factors. Currently, the rankings are defined by the number of crypto assets locked into a DeFi protocol. We were one of the first projects that you could actually lock up Ethereum to print DAI against so of course, our market dominance was much higher before Compound and Uniswap.”

TRON/WINk – Billed as the ultimate content and multimedia entertainment blockchain, Tron has made vast strides this year thanks to both entrepreneurs using it to build apps and the Tron Foundation’s own funded efforts. There are hundreds of decentralized applications using Tron as a host, and these include one of 2019’s hottest, WINk. WINk is a popular gaming blockchain built on a unique two-token system: Tron’s TRC20 and Binance’s BEP2 protocols. WIN holders on both chains can stake to support the P2P platform’s games and earn tokens that can be used in the ecosystem. According to DappRadar, WINk is currently among the top-10 most active dApps.

Tron is at a pivotal point in the history of its own blockchain after acquiring the infamous file sharing platform BitTorrent and amid rumors of a forthcoming acquisition of Steemit. Moreover, its CEO Justin Sun also recently inked a deal for Korean tech giant Samsung to integrate Tron into its Galaxy smartphone’s Software Development Kit. Regarding the deal, Sun said:

“I believe it’s very significant considering Samsung’s large user base, in which billions of people around the globe use their products every day. This gives individuals the opportunity to store TRX as well as TRC10 and TRC20 tokens in their wallets. One can also use these currencies easily to interact with all the dApps built on the TRON and Samsung platforms.”

Ethereum – The first decentralized computer, ERC20 is Ethereum’s application and smart contracts protocol, and this year saw the developer community behind it grow more than any other. Ethereum has twice as many core developers working on advancing its basic functionality than any other blockchain and more than four times the amount of monthly active developers in open-source communities. These figures result in a robust DApp selection, with the top sevenhighest-volume applications all hosted on Ethereum over competitors. These include MakerDAO, Uniswap, Kyber Network and others.

“Scaling is a problem we’ve been talking about for five years, a lot of the work is finally starting to come to fruition. On the technical side, there are a lot of things that are kind of really starting to come out right now. On the business side, I think public chains are being perceived as much more legitimate than before, including in enterprise and elsewhere.”

5) Smart contracts and DeFi in the Bitcoin ecosystem

RSK – Smart contracts are last year’s most important decentralized tool, especially due to the rise of the decentralized finance movement. RSK, formerly known as Rootstock, is notable for mobilizing the architecture underpinning Bitcoin as the more secure foundation for this future. Launched in 2015, RSK is one of the wealthier backers of smart contracts in the industry and has recently opened offices in Korea, Singapore, Georgia, Russia, Mongolia, Finland and Canada. Its new San Francisco investment fund has already helped identify and nurture several promising DeFi solutions such as Taringa, among others.

Taringa is a Spanish speaking social media platform with over 30 million users. It was acquired by IOV Labs, the company that powers RSK, so it could integrate RSK’s smart contract technology and incentivize users to participate in communities while decentralizing the platform over time. This is expected to become another crucial utility for blockchain, and as CEO of Taringa, Matías Botbol, says:

“We are already building our first tool to allow Taringa users to get rewarded by being active participants in their communities. Once this is in place, we envision adding more features, including peer-to-peer token exchanges, a marketplace for other dApps to start offering products and services to our users, and more.”

Bakkt – Bitcoin enthusiasts have heralded the arrival of institutional investors and large financial organizations to the blockchain universe, and one of the most anticipated products is Bakkt. This platform offers institutional and retail investors exposure to Bitcoin in a regulated environment that is accessible through existing brokerage channels. This is one of the most important streams of money from the fiat universe to the crypto world, and thanks to its parent company, the Intercontinental Exchange, Bakkt offers both physical Bitcoin-settled and cash-settled futures contracts.

As the new Bakkt exchange’sfutures contracts were seeing higher and higher daily volume, capping at one point $15 million, the company has described how these products fit into its short-term plan. Bakkt posted on Medium:

“These new contracts represent an important milestone in the development of this emerging asset class and our bitcoin product complex. We have great momentum going into 2020 and an exciting product roadmap.”

Binance – With its fingers in nearly every pie, groundbreaking exchange Binance had a busy 2019 in several regards. Its Launchpad product represents a newly revived initial coin offering era but in a more supervised, controlled environment, having already used the fresh supervisory model to launch seven blockchain startups since the beginning of the year. It has several other properties, including the popular centralized Binance exchange, a new Binance DEX product and accompanying Binance Chain plus BEP2 tokenization protocol, and much more.

“Blockchain is going to have a bigger impact on our society than the internet,” said Binance CEO Changpeng Zhao. “Right now, there’s probably around 0.1% of our population who has crypto, or probably less, so there’s got to be a thousand times more it can grow, potentially. We know that this technology is not going away; it’s going to disrupt the world; it’s going to disrupt our lives.” For an observer, this accurately reflects Binance’s role thus far.

Simplex – Each broker, cryptocurrency exchange and wallet application currently helping introduce the masses to blockchain needs a reliable connection to the fiat economy. Simplex is the quiet force behind this trend in 2019 by nature of its place as the backbone for countless platforms supporting customers’ ability to buy and sell Bitcoin using their credit cards. By shouldering the payment processing burdens of this year’s most prominent companies like BitMart, KuCoin, Binance and Changelly, Simplex helps give the crypto ecosystem a reputation for reliability.

Because it acts as the payment gateway for so many crypto firms, when Simplex is upgraded, the entire industry is as well. It recently added support for deposits made in Canadian dollars and Japanese yen, meaning that Binance, Huobi, and countless other client exchanges have as well. CEO of Simplex Nimrod Lehavi explains, “We don’t handle crypto directly but rather make it possible for our partners to interact with the fiat world. We take care of the fiat side of the purchase, while our partners supply the digital currency to the users.” 2020 will likely see the Turkish lira and Russian ruble onboarded as well according to Lehavi.

Coinbase – A legacy exchange if there ever was one, residents of the United States have Coinbase to thank for their seamless connection to cryptocurrency markets. This year, the number of markets hosted on Coinbase has grown significantly, which is a surprise, considering that since its earliest beginnings in 2012, Coinbase has had a reputation for its limited selection — comprising just Bitcoin, Ethereum, and Litecoin until last year. This year, the exchange has gone on a listing spree, adding its own stablecoin USDC as well as Ripple, Bitcoin Cash, EOS, Dash, Stellar Lumens, Tezos, Ethereum Classic and many more.

Staking on Coinbase is coming, and it already allows users to interact with the MakeDAO by opening collateralized debt positions. The company’s Coinbase Ventures fund has also put its immense profits to productive use this year, having already funded over 50 new startups in the space. Regarding this trend, CEO Brian Armstrong said:

“Coinbase can’t do it alone, there needs to be thousands of companies out there. We want to enable a billion people, in 5 to 10 years, to access an open financial system through our products every day.”

Skrill – In terms of established fintech companies gaining entry to the cryptocurrency and blockchain space, Skrill is of significant note, as part of a traditional payments processing business with an annual revenue of over $1.9 billion. Owned by Paysafe Group, which provides Coinbase’s crypto debit card and others, Skrill is bringing cryptocurrencies to its millions of users. In addition to allowing fiat-to-crypto conversion with over 40 fiat currencies, it has recently announced a new crypto-to-crypto conversion feature alongside the integration of Bitcoin in its Skrill Quick Checkout module. Countless businesses who are already using Skrill now have the ability to accept digital currencies as payment.

“Throughout history money has always evolved, from shells to gold to digits on your screen and a multitude of steps in between,” noted CEO of Skrill Lorenzo Pellegrino. “This could potentially be the next evolution of one of the most fundamental of human creations — although it would be careless to say this is guaranteed. Overall, however, it does excite me and that’s why I am so keen to further aid its adoption.”