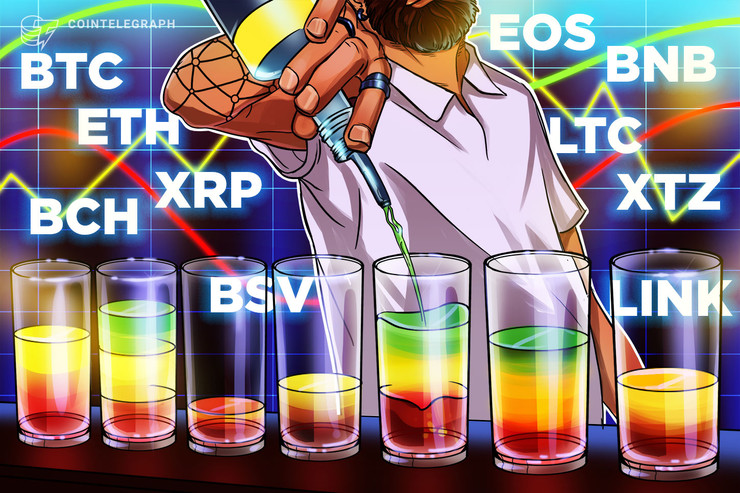 Binance CEO Changpeng Zhao believes that the upcoming Bitcoin halving has not been priced in to the digital asset’s current price action. The reduction in miner rewards will increase the cost of mining each Bitcoin, meaning, miners are unlikely to sell below their cost of production.

Bitcoin’s supply will decrease with the halving but its demand has also been increasing, creating a situation where prices are likely to driven higher. Although CZ’s statement can be interpreted as bullish, the CEO personally believes that Bitcoin’s price might gravitate around $10,000 levels for a few more days as round numbers are known to act as psychological barriers.

The traded volumes in major cryptocurrencies have skyrocketed in the past year and this shows greater participation by the traders. Currently, Tether (USDT) is the most frequently traded crypto asset, followed by Bitcoin and Ether (ETH). Liquidity provides stability to the markets and limits sharp volatile moves and this should help to attract institutional investors who have been wary of they crypto sector’s whipsaw volatility.

Sweden, one of the most cashless societies in the world, has begun a pilot program to test its central bank digital currency, the e-krona. This program will be operational until February 2021. Sweden is the second country, after the Bahamas, that is closer to launching a true working national cryptocurrency. If successful, these projects could hasten efforts by other nations to follow suit.

Can Bitcoin and altcoins resume their uptrends or will they enter into a longer period of consolidation? Let’s study their charts to find out!

Bitcoin (BTC) again dropped below the 20-day EMA on Feb. 19, which triggered our suggested stop loss on the remaining long positions. However, the bears have not been able to sustain the price below the 20-day EMA, which shows buying at lower levels.

Currently, the sequence of higher lows is still intact (shown via arrows on the chart). If the bulls can now propel the price above the overhead resistance at $10,500, the uptrend will resume.

The first target is likely to be a move to the long-term downtrend line, which is at $11,400. A break above the downtrend line will be a huge positive as it can carry the BTC/USD pair to  $13,973.50. We might suggest long positions once again after the price moves above $10,500.

Contrary to our assumption, if the bulls fail to push the price above $10,500, the bears will make another attempt to sink the price to the critical support at $9,097.15. If this support breaks down, the advantage will turn in favor of the bears.

Ether (ETH) has been consolidating between $235.70 and $288.599, which is a positive sign. As the saying goes, the longer the consolidation, the stronger will be the eventual breakout of it. With both moving averages sloping up and the RSI in positive territory, the advantage is with the bulls.

If the bulls can push the price above $288.599, the uptrend will resume. Above this level, the next target to watch out for is $318 and above it $366. Traders can protect their remaining long positions with stops at $230.

XRP reversed direction from just below the overhead resistance at $0.31503 on Feb. 19. This shows that the bears are aggressively defending this level. It should be noted that repeated retest of a support level weakens it so investors are hopeful that the price will eventually give way.

Bitcoin Cash (BCH) turned down from the trendline of the ascending channel on Feb. 19, which shows that the bears are defending this level aggressively. The altcoin is currently attempting to bounce off the 50-day SMA at $358.

This shows that the bulls are still buying on dips to strong support levels. However, the rebound off the 50-day SMA has not been sharp, which shows that demand is drying up. If the price does not move up quickly, the bears will make another attempt to sink the price below the 50-day SMA.

A move below $352.72 can drag the price to $306.78. The 20-day EMA has started to slope down and the RSI has dipped into negative territory, which indicates that the bears have the upper hand. The BCH/USD pair will show strength after it sustains above the 20-day EMA.

Bitcoin SV (BSV) has been stuck between both of the moving averages for the past five days. This shows that the range has been shrinking as traders are indecisive about the next directional move.

On the other hand, if the bears sink the price below the 50-day SMA, a retest of the support at $236 is possible. If this support breaks down, the BSV/USD pair will turn negative. We do not find any reliable buy setup at the current levels.

The 20-day EMA has flattened out and the RSI is just above the midpoint, which suggests consolidation for the next few days.

A breakout above the $80.2731-$84.3374 zone is likely to resume the uptrend. Above this zone, a rally to $100 will be on the cards. Conversely, if the bears sink the price below the 50-day SMA at $62.65, the LTC/USD pair will turn negative. We might suggest long positions after the price sustains above the small downtrend line.

EOS turned down from the 20-day EMA on Feb. 19 and plunged below the support at $4. However, the buyers stepped in at $3.6253. Currently, the bulls have again pushed the price back above $4.

The price can now move up to the 20-day EMA at $4.44. If the bears again defend the 20-day EMA, the EOS/USD pair might remain stuck between both the moving averages.

Alternatively, a break above the 20-day EMA can carry the price to the next overhead resistance at $4.8719. The pair will weaken if the bears sink and sustain the price below the 50-day SMA at $3.93.

Binance Coin (BNB) dipped to an intraday low of $21 on Feb 20, which triggered our recommended stop loss on the long positions. Currently, the price has bounced back above $21.80 but the bulls are struggling to sustain the price above the 20-day EMA at $22.44.

Conversely, if the bulls can push the price above $23.5213, a move to $27.1905 is possible. The flattish 20-day EMA and the RSI close to the midpoint suggest a few days of consolidation.

For the past two days, Tezos (XTZ) has formed long wicks on the candlesticks, which shows selling at higher levels. The bulls are facing selling close to the psychological resistance at $4. However, the positive thing is that the buyers have not given up much ground.

If the bulls can push the price above $4, the XTZ/USD pair will start its journey towards its next target objective of $4.8007036.

Conversely, if the bulls fail to sustain the price above $4, the pair might again dip to $2.752 and remain range-bound for a few days.

Chainlink (LINK) has been consolidating near the lifetime highs at $4.8671. We spot a developing symmetrical triangle formation, which usually acts as a continuation pattern. If the bulls can push the price above the triangle, the uptrend will resume.

Both moving averages are sloping up and the RSI is close to the overbought levels, which suggests that the bulls are in command. A breakout to new highs is likely to carry the LINK/USD pair to $5.6934.

Conversely, if the bears sink the price below the triangle, the pair might enter a deeper correction and drop to $3. We will wait for the price to break out of the triangle before proposing a trade in it.