The global equity markets are reeling under pressure as the coronavirus outbreak has spread outside China. While gold, the traditional safe haven, has been moving higher, Bitcoin has largely remained range-bound. This again puts focus on the frequently discussed perspective that Bitcoin is a completely uncorrelated to traditional markets. Sometimes it rallies with the equity markets and other times with gold but during certain occasions, such as now, it moves to its own beat.

In other news, Tron founder Justin Sun paid a record $4.6 million in a charity auction to have a meal with legendary investor Warren Buffet. However, it looks like he was not able to change Buffet’s skepticism on cryptocurrencies. 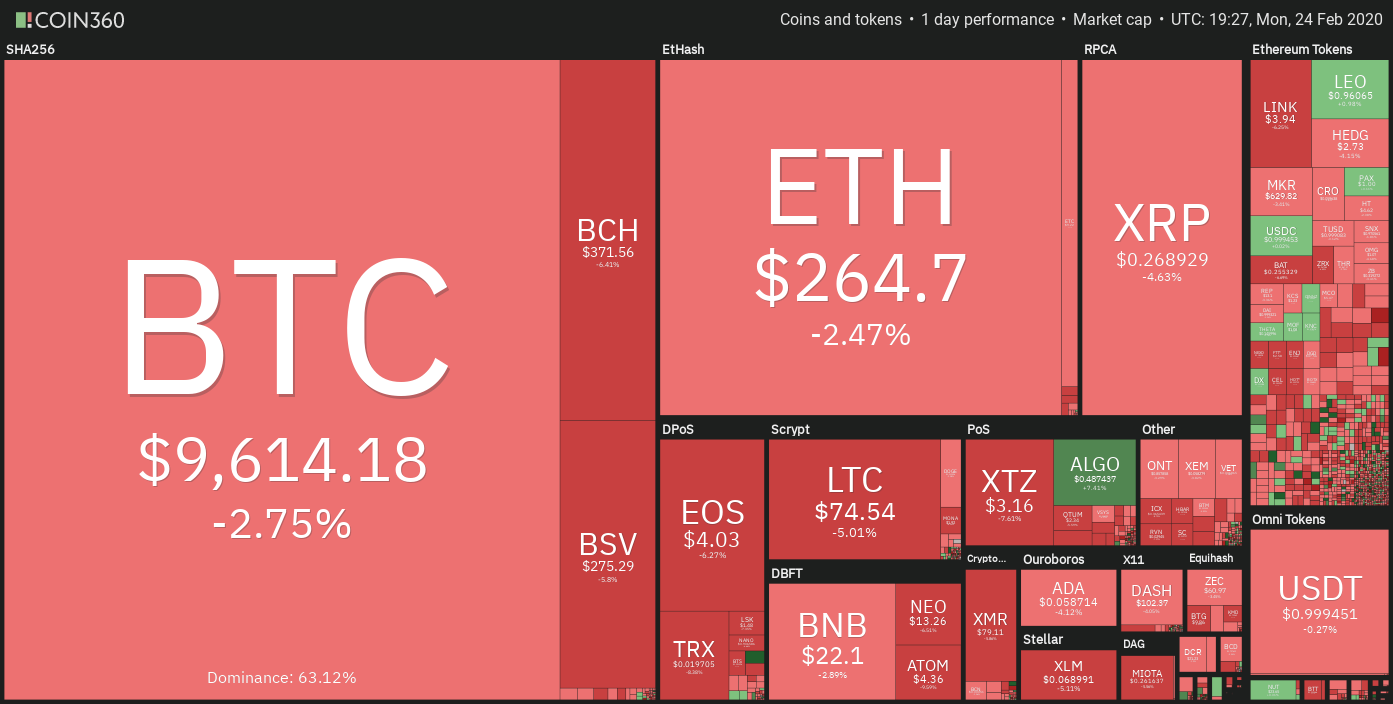 In a recent interview with CNBC, Buffet said that cryptocurrencies “have no value and they don’t produce anything,” hence, he does not own any cryptocurrency and “never will.” This shows how some traditional players are still not convinced about the advantages of cryptocurrencies.

Sun, however, remains convinced about the long-term prospects of cryptocurrencies. He said that Bitcoin will cross $100,000 in 2025 and will pull the major altcoins also along with it. While we are also positive in the long-term, let’s see what the charts project for the near-term.

Bitcoin (BTC) is currently trading inside the descending channel. If the bears sink the price below $9,600, a drop to the support line of the channel, which is close to the 50-day SMA at $9,176, is possible.

The 20-day EMA has flattened out and the RSI has dropped close to the midpoint, which suggests a range-bound action for the next few days.

If the price breaks out of the channel, the bulls can carry the price to $10,500. If this level is scaled, the uptrend is likely to resume. Above this level, a move to the long-term downtrend line at 11,350 is possible.

We anticipate the bears to mount a stiff resistance at the downtrend line once again. However, if the bulls can push the price above it, the BTC/USD pair is likely to pick up momentum.

Conversely, if the bears sink the price below the channel, the trend will turn in favor of the bears. We do not find any reliable buy setups at the current levels, hence, we remain neutral on the pair.

Ether (ETH) has been largely stuck between $235.70 and $288.599. We spot a symmetrical triangle, which usually acts as a continuation pattern. With both moving averages sloping up and the RSI in the positive zone, the advantage is with the bulls.

If the bulls can push the price above the triangle and the overhead resistance at $288.599, the uptrend will resume. The triangle setup has a target objective of $330. If this level is crossed, the up move can extend to $366.

Contrary to our assumption, if the bears sink the ETH/USD pair below the triangle, a drop to $235 and below it to the 50-day SMA at $200 is possible. Therefore, we suggest traders retain the stop loss on their remaining long positions at $230.

The bulls are struggling to carry XRP higher. This shows a lack of demand at higher levels. We spot a possible head and shoulders pattern that will complete on a break and close (UTC time) below $0.26362.

This bearish setup has a target objective of $0.18043 on the downside, which is close to the recent lows at $0.17468. However, it might not be a waterfall decline as we expect the bulls to defend the support at $0.21.

The XRP/USD pair is likely to pick up momentum on a break above $0.35. For now, the traders can protect their long positions with stops at $0.26.

If the bulls fail to push BCH above the 20-day EMA, the bears will make another attempt to sink the price below the critical support at $360. If successful, a drop to $306.78 is possible.

On the other hand, if the bulls can push the BCH/USD pair above the 20-day EMA, a move to the trendline of the ascending channel is possible. We do not find any reliable buy setup at the current levels, hence, we suggest traders remain on the sidelines.

The bears are defending the 20-day EMA, which shows a lack of demand at higher levels. If Bitcoin SV (BSV) dips below the 50-day SMA at $277, a drop to $236 is possible. A break below this support will be a huge negative.

Contrary to our assumption, if the bulls can push the price above the 20-day EMA, a rise to $337.80 is possible. A break above this resistance can result in a move to $382.47 and above it to the lifetime highs.

If the BSV/USD pair bounces off the support at $236, we might suggest a long position with a close stop loss. Until then, we remain neutral on the pair.

Litecoin (LTC) is struggling to climb above the overhead resistance at $80.2731. This shows that the bears are still active at higher levels. If the price dips below the 20-day EMA at $73.60, it can again decline to the support at $66.1486. This will keep the altcoin range-bound for a few more days.

The LTC/USD pair will turn negative on a break below the support at $66.1486. If this support cracks, the next level to watch out for is $50.

Therefore, the traders can buy on a breakout and close (UTC time) above $85. We shall suggest a close stop loss after the trade triggers.

The bears are again attempting to defend the 20-day EMA. This is a negative sign as it shows that the sentiment is changing from buy on dips to sell on rallies. If EOS drops below the 50-day SMA at $4.00, it is likely to drop to $3.50.

With the 20-day EMA sloping down and the RSI dipping into the negative territory, the advantage is shifting in favor of the bears.

Binance Coin (BNB) is currently stuck in a tight range between $21.80 and $23.5213. The 20-day EMA has flattened out and the RSI is just above the midpoint. This points to a balance between the buyers and sellers.

Nonetheless, if the support at $2.9204864 cracks, the XTZ/USD pair can drop to $2.6025, which is the 50% retracement level of the rally. We do not find any reliable buy setups at the current levels, hence, we are not proposing a trade in it.

Cardano (ADA) has once again climbed back into the top ten list of cryptocurrencies by market capitalization, hence, it has been included in the analysis. The bulls are currently attempting to keep the price above the critical support at $0.0560221, which is just below $0.0570183, the 38.2% Fibonacci retracement level of the most recent rally.

If the support holds, the ADA/USD pair might remain range-bound between $0.0560221 and $0.0652290 for a few more days. The flattish 20-day EMA and the RSI close to the midpoint also suggest a range formation.