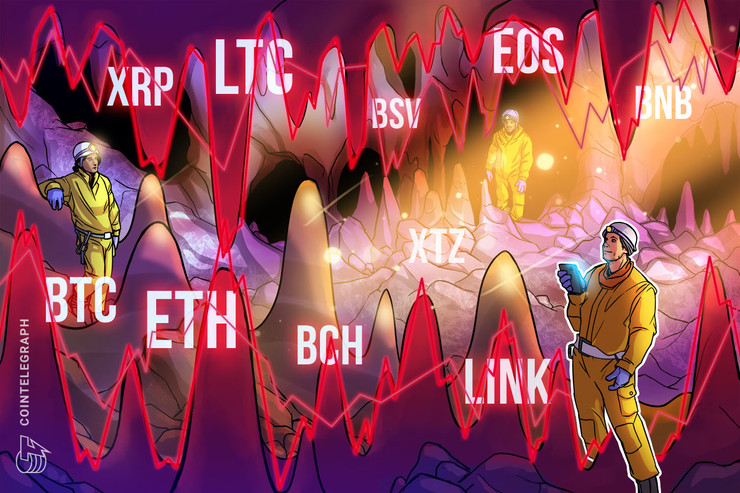 Grayscale Investments managing director Michael Sonnenschein said that “Bitcoin itself has solidified its role as a store of value or as a digital gold.” In his conversations with institutional investors, Sonnenschein explained that he has seen a big change in the way they view Bitcoin. According to him, now, several institutional investors are looking to add cryptocurrency to their portfolio, which was not the case just 12 to 18 months ago.

In a report, KPMG has said that institutional players are concerned about the lack of proper custody for cryptocurrencies. Co-lead of KPMG’s crypto asset services Sal Ternullo said :

“Institutional investors especially will not risk owning crypto assets if their value cannot be safeguarded in the same way their cash, stocks and bonds are.” In order to fill this gap, several traditional and crypto players have started offering custody services, which is a lucrative business to be in.

Popular analyst Willy Woo believes that Bitcoin has started its bull run, which can reach at least $100,000. However, gold bug Peter Schiff has a completely different view on Bitcoin. Schiff said: “If Bitcoin won’t go up, why own it? The answer to that question is ‘sell.’  Look out below!”

It should be noted that Bitcoin’s failure to rise in value due to a certain short-term event should not be the criteria to sell. During the last financial crisis, both gold and the equity markets fell sharply between mid-March to mid-October 2008. However, after the panic settled, the gold markets embarked on a strong bull run. Let’s study the charts to find out which cryptocurrencies are likely to move up or down.

Bitcoin (BTC) price has been stuck between $8,400 and $9,000 for the past few days. This shows uncertainty among traders as they are not taking a decisive directional bet. Even though the bulls are buying close to $8,400, the buying dries up at higher levels. Similarly, bears are mounting a stiff resistance at $9,000 but are not following it up with aggressive selling below $8,400.

As a result, the BTC/USD pair has been hovering close to the 200-day SMA for the past few days. The downsloping 20-day EMA and the RSI in the negative zone suggest that the bears have the upper hand.

The short-term traders can buy on a breakout and close above the 20-day EMA with a stop loss at $8,400. This is a risky trade, hence, we suggest traders use only about 40% of the usual position size.

Ether (ETH) once again turned down from the overhead resistance at $235.70 on Mar. 3. The 20-day EMA at $234.7 is just below the horizontal resistance. Therefore, we expect the bears to defend this resistance aggressively.

On the downside, the bulls have been providing support close to $209.95. However, we expect a breakout or breakdown of this tight range soon.

The bulls have not been able to achieve a strong bounce off the support at $0.22250. This shows that buyers are in no rush to initiate long positions even at these levels. XRP has formed a small descending triangle pattern, which will complete on a break below $0.22250.

Our bearish view will be invalidated if the XRP/USD pair rises above the moving averages and the overhead resistance at $0.26362.

The bulls have failed to push Bitcoin Cash (BCH) above the descending channel. This shows a lack of buyers at higher levels. The bears will now attempt to sink the altcoin below $306.78.

If successful, a drop to $270.15 is possible. The 20-day EMA is sloping down and the RSI is in the negative zone, which suggests that bears have the upper hand.

Conversely, if the BCH/USD pair again bounces off the support at $306.78, the bulls will make another attempt to carry the price above $360. If successful, a rally to $400 and above it to $500 is possible. There is a minor resistance at $430 but we expect it to be crossed. We will turn positive on a close (UTC time) above $360.

Bitcoin SV (BSV) has once again turned down from the 20-day EMA, which shows that bears are aggressively defending it. If the price sustains below $236, a retest of the recent lows at $204.310 is likely.

Though Litecoin (LTC) has been trading above the 200-day SMA for the past two days, the bulls have not been able to push it to $66.1486. This suggests that buying dries up at higher levels.

If the LTC/USD pair again dips back below the 200-day SMA, it can retest the recent lows at $56.2430. If this level holds, the pair might remain range-bound for a few days but if the level cracks, a drop to $50 is likely.

Alternatively, if the bulls can push the price above the overhead resistance at $66.1486, the pair can move up to $80.2731. We will wait for a new buy setup to form before recommending a trade in it.

EOS has broken out of the downtrend line but it has not picked up momentum. This shows a lack of buyers at higher levels. The price might trade between the 200-day SMA at $3.36 and $4 for a few days.

The 20-day EMA is sloping down and the RSI is in negative territory, which suggests that bears have the upper hand. A break below the 200-day SMA will be a huge negative, which can drag the price to $3 and below it to $2.4001.

Conversely, if the EOS/USD pair can rise above the overhead resistance at $4, a move to $4.8719 is possible. We do not find a reliable buy setup at the current levels, hence, we suggest traders remain on the sidelines.

Binance Coin (BNB) is facing selling at the resistance line of the descending channel. However, the positive thing is that the bulls have not given up much ground, which increases the possibility of a breakout from the channel.

Conversely, if the BNB/USD pair fails to scale above the 20-day EMA, the bears will attempt to sink it back below the recent low of $17.7051. If successful, it will be a huge negative and can drag the price to $16.4288.

Therefore, we retain the buy recommendation given in the previous analysis. If the momentum can push the XTZ/USD pair to new highs, the rally can extend to $5.3735.

Chainlink (LINK) has resumed its uptrend and has made a new high. The 20-day EMA is sloping up and the RSI is in the positive territory, which suggests that bulls are firmly in command.

If the bulls can sustain the price close to the highs, it will signal a strong demand even at higher levels. The first target on the upside is $5.6934 and above it $7.3101.

However, if the LINK/USD pair fails to sustain the highs, the bears will attempt to sink it back to the 20-day EMA and below it to the trendline.