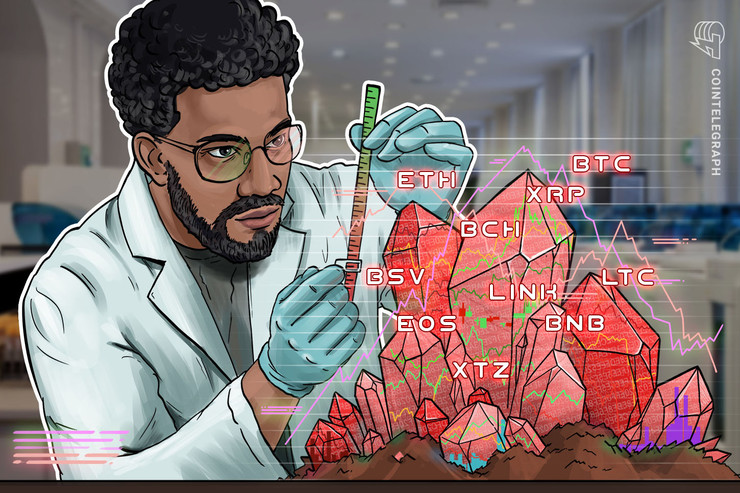 Governments and citizens across the world are in a state of panic as cases of coronavirus continue to rise. This has rocked global equity markets for the past few days and volatility has spiked to levels not seen since the last financial crisis. This shows that fear has gripped the traders and they are likely to sell everything at hand. Even gold sold off today.

Compared to other assets that have been around for centuries, cryptocurrencies are a new asset class that has not witnessed any major crisis. Hence, the traders are unsure about their performance. Therefore, we do not see a surge in Bitcoin (BTC) buying and given the current $2,000 drop, it will be interesting to see what price levels entice buyers.

The central banks across the world are likely to cut rates aggressively to tackle the slowdown due to coronavirus. The US Fed has already done an emergency rate cut of 50 basis points and is expected to cut more. The Bank of England also slashed rates by 50 bps on Mar. 11. Soon, the other central banks are also likely to resort to rate cuts or will announce stimulus measures to counter the slowdown.

A lack of growth coupled with unmanageable debt is a recipe for disaster, as warned by the World Bank recently. Under such situations, cryptocurrencies could offer a ray of hope. However, as the current sentiment is of panic, crypto prices might remain volatile before bottoming out. Let’s analyze the charts to spot the critical levels to watch out for.

Though we were expecting $6,435 to offer a strong support, that did not happen. The momentum was too strong and it dragged the BTC/USD pair to $5,640. The intensity of the decline shows that the traders are offloading their positions in a state of panic.

If the price does not recover and close (UTC time) above $6,435, the decline can extend to the support line of the long-term symmetrical triangle, which is close to $4,800 levels. We anticipate the bulls to defend this level aggressively.

With today’s fall, the RSI has dropped deep into the oversold territory, which shows that the selling has been overdone in the short-term. However, when fear grips the traders, support levels are rarely respected but bottoms are also usually formed after such panic selling.

Therefore, long-term investors should look at the current decline as a buying opportunity. We expect the pair to form a bottom within the next few days.

After failing to rise above $209.95 on Mar. 9 and 10, Ether (ETH) has resumed its down move. Today’s fall has broken several support levels. Selling picked up momentum after breaking below the 200-day SMA and the support at $155.612.

The ETH/USD pair plunged to a low of $122.498, which is just above the critical support at $117.090. Currently, the bulls are attempting a bounce off this support level, which is a positive sign as it shows some buying at these levels.

However, as the trend is clearly down, we expect the bears to mount a strong defense at $155.612. If the price turns down from this level, the pair might consolidate for a few days. We will watch the price action at $117.090 and suggest long positions if the pair forms a reversal pattern.

The bounce off $0.20 levels on Mar. 10 did not find buyers at higher levels, which attracted selling. XRP has been trading inside a descending channel and is in a strong downtrend. Though we had expected $0.17468 to offer a strong support, that did not happen.

The XRP/USD pair plummeted below the critical support at $0.17468 and fell to a low of $0.14567, which is close to the support line of the descending channel.

Currently, the bulls are attempting to defend the support line of the channel. If the price can bounce and close (UTC time) above $0.17468, it will signal buying at lower levels. We will wait for the pair to breakout of the descending channel before turning positive.

The failure of the bulls to push Bitcoin Cash (BCH) back above the 200-day SMA has attracted aggressive selling. The altcoin broke below the support line of the descending channel and dipped to a low of $165.25.

We anticipate the bulls to defend the support at $169.62. If the price can re-enter the channel, it will signal buying at lower levels.

Our view will be invalidated if the bears sink and sustain the BCH/USD pair below $169.62. Such a move will be a huge negative as it will open the doors for a fall to $150 and below it $105. We will wait for a reversal pattern to form before recommending a trade in it.

Bitcoin SV (BSV) had been gradually falling inside the descending channel and today’s price action hammered the price below the 200-day SMA at $160 all the way down to $108. If the bearish price action sustains, the altcoin could decline to $78.506.

The bulls are currently attempting to defend the support line of the descending channel. If successful, we anticipate the bulls to make an attempt to propel the BSV/USD pair above the 200-day SMA.

A break above the 200-day SMA will be a positive sign as it will indicate aggressive buying at lower levels. However, if the pair turns down from the 200-day SMA, a few days of range-bound action is possible. We do not find any reliable buy setup at the current levels, hence, we suggest traders remain on the sidelines.

The LTC/USD pair broke below the channel and dropped to a low of $29.8560. If the pair fails to re-enter the channel within the next couple of days, the decline can extend to $23.09.

However, the RSI has dropped deep into oversold territory, which suggests a rebound might be around the corner. If the price bounces off the current levels and re-enters the channel, the bulls will try to push the price to $40 and above it to $50. We will wait for a new buy setup to form before proposing a trade in it.

After hovering around the $3 mark for the past three days, the bears took charge today and plummeted EOS to a low of $1.8258. The failure of the bulls to defend the support line of the descending channel and the support at $2.1624 is a huge negative.

Conversely, if the bulls can carry the pair above $2.4001, it will indicate buying at lower levels. The RSI has dived deep into the oversold territory, which also suggests a relief rally might be around the corner. We will wait for a reversal pattern to form before recommending a trade in it.

Though the bulls held the $16 support for the past three days on a closing (UTC time) basis, they could not achieve a strong rebound off it. This attracted selling, which has resumed the down move in Binance Coin (BNB).

The BNB/USD pair dived to a low of $9.8888 today, which is a huge negative. However, the bulls are currently attempting to push the price back above $12.1111. If successful, it will signal strong buying at lower levels.

On the other hand, if the bulls fail to sustain the price above $12.1111, we expect the bears to try and resume the down move once again. A break below $9.8888 can extend the fall to the $8.4-$9 support zone. As the trend is in favor of the bears, we will wait for a reversal pattern to form before turning positive.

The bulls aggressively defended the $2.5263-$2.2845136 zone for the past three days but they could not push prices higher. Tezos (XTZ) is currently witnessing a fresh bout of selling that has plunged it to the 200-day SMA at $1.51.

The bulls are currently attempting to defend the 200-day SMA. If the buyers can push the XTZ/USD pair back into the channel, it will be a positive sign.

Conversely, if the pair turns down from the channel, the bears will make another attempt to sink the price below the 200-day SMA. If successful, a drop to $1.25510 is possible.

Chainlink (LINK) had a flash crash today and it plunged to a low of $0.0001. However, the price has quickly recovered and is trading close to the 200-day SMA at $2.56. The altcoin completed a double top pattern when it broke below $3.3113. The target objective of this bearish setup was $1.7555.

Though we had expected the bulls to defend the $3.3113-$3 support zone aggressively, that did not happen. This shows a lack of demand at these levels.

However, if the LINK/USD pair can bounce off the 200-day EMA and climb above $3, it will be a huge positive. On the downside, the support is at $1.50.