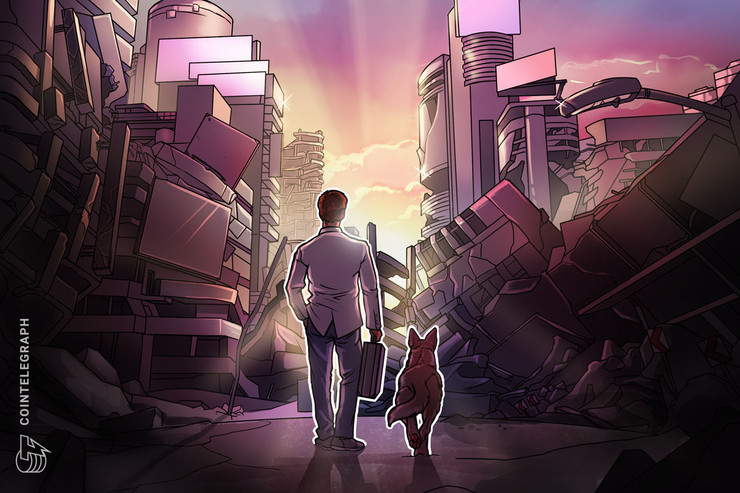 Ethereum co-founder and founder of Cardano, Charles Hoskinson, pronounced “the economic order of the 20th century” dead in a recent YouTube livestream.

By “the economic order of 20th century”, Hoskinson means a centralized hierarchical economy that was built through “a series of treaties” made by a few great powers, this economy was built for the times  “when information was not instantaneous”, and when most people were willing to accept “big brother’s” dictum.

Hoskinson said that the recent market downturn was caused by the incongruence of the hierarchical order created by powerful institutions like governments, corporations, international organizations, where few powerful entities decide the fates of billions. This centralized hierarchical structure no longer represents the world we are living in, the world that is becoming flat and decentralized, he said.

According to Hoskinson, the new decentralized order ushered by blockchain technology is meant to solve some of the most pressing issues of modernity such as data ownership, privacy, and identity; an order in which there will purportedly be no need for CEOs or presidents.

Hoskinson believes that the very fabric of the world order is unraveling before our eyes:

“What we are looking at right now is the unraveling of the economic order of the 20th century… Winners and losers that had certain assumptions about how power should work, how money should work, how credit should work, how finance should work, how information needs to flow. And this economy was sustainable and stable when information was not instantaneous. And when it was totally acceptable to have empires, meaning one or two nation-states being supreme above all others and establishing all the rules and regulations.”

Will the European Union survive?

Hoskinson claims that the old system was patching up the old economy with things like easy credit, which led to “a five-fold increase” in the United States national debt in less than 20 years. In Japan’s case, the Olympics was supposed to kickstart the country’s stagnating economy, but it will not happen because of the “global pandemic” known as the coronavirus. He points to Italy, where “16 million people” may potentially be quarantined. Hoskinson believes this will lead to the election of a populist government:

“And we’ll probably see an Italian version of Brexit come. And can the European Union survive if Italy leaves? Perhaps France next.”

The U.S. sacrifices millions of lives for Donald Trump to get re-elected

After lashing out at international governments, Hoskinson hits the U.S. establishment:

“Our president and the opposition party could have set their petty rivalries aside and said it’s for the good of our people. We should work together instead. What did they do? They looked at it like a political game. And they said, hey, let’s go ahead and see who could score the most points. A recession is bad for the incumbent president. So let’s just make sure that that happens regardless. And meanwhile, the other side is ignoring the fact that we are entering into a pandemic and millions of people could die because they don’t want the markets to collapse. It’s disgusting.”

No need for a central authority

Hoskinson believes that the establishment for the past 10 years has paid no attention to epidemiologists’ warnings about “a global pandemic that could kill two hundred million people and collapse the global economy. It was one of the [last] priorities of the world order.”

He summarizes, “You are seeing a lack of fundamental integrity. People do not have faith that the institutions we have can protect us and allow us to address the problems of the 21st century.” He unequivocally states:

Crypto is not about “fast returns”

Hoskinson states that the cryptocurrency industry is not about “fast returns” or “the price of Bitcoin,” but it is about disrupting the old way of doing things:

“It has everything to do with a global conversation about changing the way we do things, not just in institutions. Whether we should put power in one or the other about removing the need overall from institutions.”

The movement for decentralization is built on “immutable rules” that do not bend with the wind, do not care about politics, natural disasters or plague. These rules behave similarly to the “laws of physics,” and because of that, they are fundamentally better to build upon.

Hoskinson believes that people are fed up living in a society where old-world institutions control their financial accounts, data and identity. According to him, they are ready to take back control.

He also observes that the “fastest-growing browser right now” is Brave, built on “the foundations of a cryptocurrency.” At current adoption rates, the browser may be more popular than Google Chrome in five years.

Towards the end of the stream, Hoskinson addresses the crypto community with calming words, stating that the crypto industry is more resilient than traditional markets, which panic when they shed 10%, whilst crypto space is used to collapses of 90%.

He believes it’s important to keep the big picture in mind and says what this industry is building will fundamentally change the way society operates. Despite some philosophical differences that he may have with rivals like EOS and Tezos, Hoskinson says “this industry as a whole is philosophically aligned about killing the middle man and building a better world for everybody.”