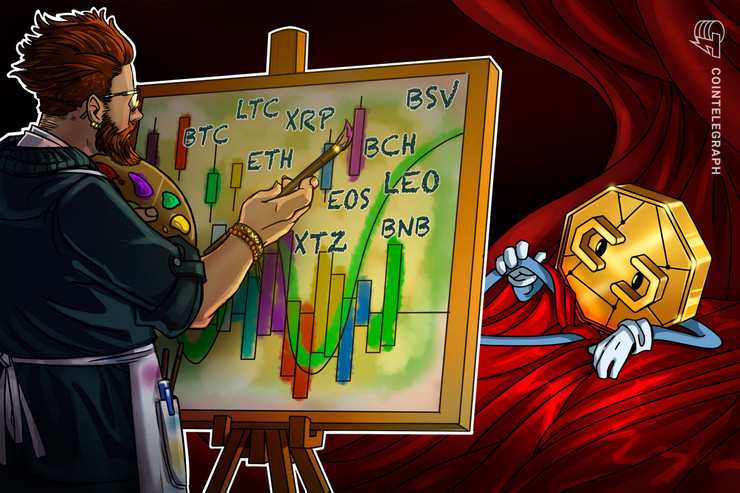 Capitulation occurs when traders are scared. On March 12, most asset classes witnessed a massive selloff with no place to hide. Even gold declined 3.17%, which shows that the traders sold everything in their portfolio. The coronavirus pandemic has created a state of panic because it does not have any treatment and spreads quickly. As a result, large cities and in some cases, the whole country is in a lockdown, in attempts to control it.

That led to panic selling in cryptocurrencies on March 12, which had been comparatively holding up quite well until then. The market capitalization of the crypto universe plunged from about $224 billion on March 12 to a low of about $131.5 billion on March 13. That is a fall of over 41%, which shows the extent of the carnage.

Usually, after such sharp selling, the markets tend to bottom out because the traders who had purchased at higher levels sell their positions, which are purchased by investors who have long-term conviction. Such investors, as they have purchased at lower levels, have higher holding power.

Tone Vays believes that the capitulation in Bitcoin (BTC) seen today is the end of the bear market. Though he believes that Bitcoin has bottomed out, he does not rule out another decline below $5,000 levels. Vays also warned that “the road back up will be harder than people realize.”

Contrary to Vays, veteran trader Peter Brandt believes that Bitcoin can drop to sub $1,000 levels. We had warned our readers to not get overly bullish when targets of $20,000 and higher were being projected a few weeks back. Similarly, we suggest traders not get discouraged by ultra-low targets. At the same time, traders should avoid buying just because something has declined sharply. It is better to wait and buy after some reversal signs are seen. Let’s analyze the charts and spot the critical levels to watch out for.

Bitcoin (BTC) plunged close to 40% on March 12, which shows that traders just dumped their positions to salvage whatever cash they could. Usually, during such a fall, most of the speculative positions are closed.

While the short-term traders stay away, the long-term investors use these panic-driven declines to add to their position.

The BTC/USD pair dived to a low of $3,803.58 today, from where the relief rally started. Currently, the price has re-entered the symmetrical triangle, which is a positive sign as it shows strong buying at lower levels.

However, the bulls are not able to sustain the higher levels, which suggests that the selling is not over yet. With buying at lower levels and selling on rallies, the volatility is likely to remain high for the next few days. Though too early, we feel that the pair is close to a bottom.

The pullback might reach $6,435 levels, which is likely to act as a resistance. If the next decline gets arrested at the support line of the symmetrical triangle, it will confirm a bottom. Our bullish view will be invalidated if the price turns down from the current levels or from $6,435 and drops below $3,803.58.

Ether (ETH) plummeted below the critical support at $117.090 on March 12. Thereafter, the decline extended to $87.131 from where the bulls are attempting a relief rally. This is a positive sign as it shows strong demand at lower levels.

If the bulls can sustain the price above $117.090 for three days, it will indicate strength. The relief rally can reach $155.612, which is likely to act as a stiff resistance. If the price turns down from this level but stays above $117.090, it will confirm a bottom.

Our bullish view will be invalidated if the ETH/USD pair turns down from the current levels or from $155.612 and dives below $87.131.

XRP broke below the support line of the channel on March 12 and extended the decline to $0.1140 today. However, strong buying at lower levels has pushed the altcoin back into the channel, which is a positive sign.

However, the bulls are facing stiff resistance at $0.17468. If the XRP/USD pair dips from this level but stays above $0.1140, we expect the pair to enter a bottoming process.

Contrary to our assumption, if the price turns down from the current levels or from $0.17468 and breaks below $0.1140, the downtrend will resume. The pair will signal strength after the price breaks and sustains above $0.17468.

Bitcoin Cash (BCH) plummeted below the support line of the descending channel and the horizontal support at $169.62 on March 12. However, the positive thing is that the bears could not capitalize on the breakdown and sink prices lower.

Strong buying below $169.62 levels started a relief rally that had carried the BCH/USD pair back into the channel. However, the bulls could not defend the higher levels, which shows that the bears are still selling aggressively on minor rallies.

Currently, the bulls are attempting to keep the price above $169.62. If successful, we anticipate another attempt to push the price back into the channel.

Bitcoin SV (BSV) dropped to a low of $82.771, which is just above the critical support at $78.506. This shows that the bulls are attempting to defend this support. The relief rally is likely to face resistance at the 200-day SMA at $160.

On the other hand, if the bulls can propel and sustain the price above the 200-day SMA, it will signal that there are buyers at lower levels. We will wait for the price to rise above the descending channel before turning positive.

Litecoin (LTC) broke below the support line of the descending channel and closed (UTC time) below it on March 12. The follow-up selling plunged the price to $23.9777 where buying emerged.

Currently, the bulls are attempting a relief rally, which is facing resistance in the $38.8015-$35.8582 zone. If the LTC/USD pair turns down from this level, the bulls will attempt to resume the down move. A break below $23.9777 will be a huge negative.

Conversely, if the bulls can sustain the price above the resistance zone, it will indicate strength. We will wait for a new buy setup to form before proposing a trade in it.

EOS broke below the channel and the support at $2.1624 on March 12. That was followed by further selling today, which dragged the price to $1.42, which is a multi-year low.

Currently, the bulls are attempting a relief rally that is facing resistance in the $2.1624-$2.4001 zone. If the price turns down from this level, the bears will try to resume the downtrend. A break below $1.42 will be a huge negative.

However, if the bulls can push the EOS/USD pair back above $2.4001, it will signal demand at lower levels. We will wait for a new buy setup to form before recommending a trade in it.

Currently, the BNB/USD pair is attempting a relief rally that is likely to face resistance at $12.1111. If the price turns down from this level, the bears will attempt to resume the downtrend.

Conversely, if the price climbs and sustains above $12.1111, it will be a positive sign. We will wait for the pair to form a reversal pattern before turning positive.

Tezos (XTZ) plunged below the support line of the descending channel and the 200-day SMA at $1.51 on March 12. That was followed by another round of selling today that dragged the price to $1.0096.

However, the strong buying at the lows has propelled the XTZ/USD pair back above the 200-day SMA, which is a positive sign.

Currently, the bears are attempting to defend the channel line. If the price turns down from the current levels but finds support at the 200-day SMA, it will signal that a bottom has been made at $1.0096 and might offer a buying opportunity

However, if the bears once again sink the price below the 200-day SMA, a retest of $1.0096 will be on the cards. A break below this level will resume the downtrend.

UNUS SED LEO (LEO) has risen to the top ten list in terms of capitalization. Hence, it has been included in our analysis today. Compared to the other major cryptocurrencies, LEO has been a huge outperformer as it has not succumbed to selling.

While most cryptocurrencies are well below their 20-day EMA, the LEO/USD pair is close to the 20-day EMA. It is currently trading inside a range of $0.90 to $1.025.

The pair has formed an inverse head and shoulders pattern, which will complete on a breakout and close (UTC time) above $1.04. On the other hand, if the pair slips below $0.90, it can drop to $0.85 and below it to $0.80. We will wait for the price to close above $1.04 before turning positive.