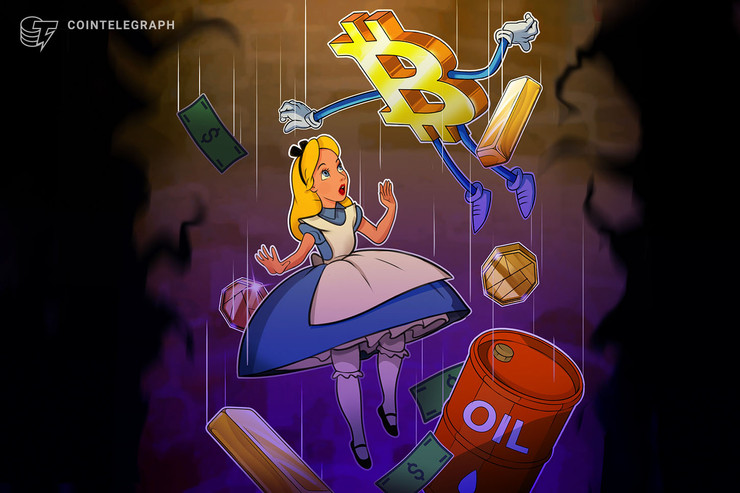 Since coming to power back in 2016, President Trump seemed to have reinvigorated the United States stock market after it showed signs of slowing down throughout the first half of the previous decade. Just three weeks ago, the American market witnessed a combined gain of 58% compared with the last three or so years. However, following the World Health Organization’s recent declaration of the novel coronavirus pandemic on March 11 — with the independent research body citing 118,000 cases and more than 4,000 deaths globally — this rosy picture seems to have reversed almost overnight.

Additionally, ever since news of the medical emergency went live, markets all over the world began to crash at an unprecedented rate, with powerhouse economies such as Australia and India already gearing up for a period of heavy recession.

Not only that, regular office work all over the world has also been disrupted quite heavily — with many companies choosing to adopt work-from-home policies, seriously affecting global supply chains and causing many high-profile public events and major conferences to be cancelled.

In the midst of all this, Bitcoin (BTC) has been on the receiving end of a lot of bearish pressure, with the premier crypto asset falling from $10,000 on Feb. 24, down to $4,800 by March 12. More specifically, Bitcoin’s value slid by more than $3,000 after New York State Governor Andrew Cuomo released a public statement issuing a medical emergency, thus sealing off a one-mile containment area around the NYC suburb of New Rochelle.

Despite the apparent link between BTC’s price drop and the ongoing market slump, some experts believe that the flagship cryptocurrency’s slide has more to do with the recent PlusToken dump and other internal factors rather than the prevailing coronavirus-induced market scare.

Regarding the matter, Bill Herrmann, CEO of alternative investment banking firm Wilshire Phoenix, is of the opinion that Bitcoin’s current negative movement can largely be attributed to the instability of the traditional market. On the subject, he opined: “In times of extreme volatility, which is often followed by panic — most retail investors, whether it’s Bitcoin or in equities, sell first and ask questions later.”

A similar opinion is also shared by Mati Greenspan, founder of Quantum Economics, who told Cointelegraph that it is quite extraordinary that during this period of extreme volatility, “Bitcoin seems to be mirroring stock indices quite concisely.”

However, David Waslen, CEO of HedgeTrade — a blockchain-powered financial trading application — told Cointelegraph that while there is definitely a correlation between Bitcoin’s performance and the traditional market at large, the comparisons are quite limited in nature since a number of niche variables make BTC totally different. Waslen added:

“Bitcoin’s price did react correspondingly to the stock market plunge recently, and continues to correlate to world news announcements. But it also does its own thing, for instance pumping on March 6th while stocks were in a tailspin. It’s also affected by things that have absolutely nothing to do with traditional markets, such as mining, whales, and exchange hacks.”

Is Bitcoin truly an independent store of value?

With Bitcoin seemingly reacting quite strongly to the price corrections being witnessed in stocks, crude, and other commodities, it is worth exploring an answer to the question, “Is BTC really an uncorrelated asset class?”

Greenspan believes the events that are currently unfolding have served a devastating blow to a number of theories that many pro-crypto users gravitate toward whenever the price of BTC rises or falls independently of the traditional stock market:

“This price action is seemingly a damaging blow to two narratives that Bitcoin proponents tend to gravitate to. First, it is an uncorrelated asset class. And second, Bitcoin acting like the stocks during uncertain times means that it is now positioned as a risk asset rather than a safe haven.”

Similarly, Simon Peters, analyst for trading and multi-asset brokerage company eToro, believes that the aforementioned correlation is primarily being witnessed due to the ongoing pandemic underlying the traditional and crypto markets. On the subject, he told Cointelegraph during the London Blockchain Week:

“With coronavirus, it’s not a geopolitical issue as such. It’s a global pandemic. That’s where I think the argument for crypto is, in that area where we see a change in the monetary policy of central banks or an increase in liquidity in the markets.”

Lastly, Brian Hankey, co-founder of Cache, a provider of gold-backed tokens, told Cointelegraph that while gold and silver may be looking at short-term losses, in the medium-to-long term, they will continue to be looked at as good investment avenues. Additionally, he further pointed out that owing to the various industrial use cases associated with silver, the precious metal has a lot of potential upside.

Despite Bitcoin showcasing a mild tendency to start tracking traditional markets from time to time — if not testing some sort of relative correlational patterns — cryptocurrencies are still widely perceived to be a unique kind of uncorrelated, asymmetrical asset class.

However, since a flow of value to crypto has to occur from traditional markets, there is quite obviously a link there. On the subject, Glenn Benavides, co-founder of the Global Crypto Alliance — an organization comprising of experienced professionals with expertise in business development and blockchain ecosystems — told Cointelegraph:

“We saw Bitcoin move positively together with Gold and the S&P500 in the previous months. Now we see Crypto crashing as the rest of the world crashes during the COVID-19 panic. This does not mean Crypto will start behaving as a totally correlated asset from this moment. But, we can expect some more correlation from now on, in my opinion, as Crypto is plugged into traditional markets in order to fuel them.”

Speaking on Bitcoin’s role as a store of value that could rival conventional safe havens such as gold and silver, Jaian Cuttari, CEO at financial services ecosystem BDAM Foundation, told Cointelegraph that Bitcoin has failed to live up to its expectations, since many from within the crypto community believed that while markets all over the world were sliding, the premier digital currency would be able to weather the storm and thus serve as the perfect long-term investment vehicle for many, adding:

“It simply is not a viable investment as many had believed. Bitcoin is very controlled by a few groups of large holders. This puts Bitcoin at greater risk of rapid value loss. This can be seen by the $30 billion dollar wipe out on btc market cap in 3 days. This is not normal and shows sophisticated sell offs from high volume holders are bringing btc to historic lows once again.”

Lastly, it bears mentioning that up until March 8, Bitcoin had managed to hold onto most of its value amid the sharp sell-off in equities, oil and most other markets. The only other commodity that proved to be more resilient was gold, with the precious metal trading near its seven-year high levels recently.

The broader cryptocurrency market finally saw a steep liquidation on Thursday and Friday when most digital currencies saw a downward correction of 20% to 40%. Ultimately, Bitcoin has followed the rest of the financial markets lower in response to the coronavirus crisis, albeit with a lag time of about two weeks.

Is a global recession right around the corner or are we in the midst of one?

Even before the threat of Covid-19 started to disrupt supply chains all over the world, there was a looming fear that the global financial system was on the verge of a full-blown recession. Now that the coronavirus has forced a number of markets to slow down considerably, a whole host of experts believe that the effects of a global economic slowdown are starting to show.

Expounding his views on the matter, Hankey is of the opinion that there is a strong possibility that a recession-type scenario could be real as “It’s clear that the global financial system is extremely overburdened by debt,” due to the fact that years of low-interest rates have fuelled clearly reckless malinvestment, adding:

“Many stocks have obscenely high P/E ratios (if they have any earnings at all). It’s unclear what the catalyst will be or if it has occured yet. It may or may not be the Coronavirus. In any case, I think it’s hardly controversial to say that we’re long overdue for a major recession.”

It is also important to point out that the Federal Reserve’s recent $1.5 trillion liquidity injection into the market — after Wall Street circuit breakers went off twice this week — seems to be a clear signal that the coronavirus panic is being taken seriously and a global recession might be around the corner.

However, not everybody seems to agree with the hypothesis that a bear market is here to stay. In this regard, Cuttari believes that as things stand, it is the virus scare rather than a market recession that is causing all of the ongoing economic chaos. Similarly, Benavides also is of the opinion that a relative crisis that is affecting some networks of institutions and traditional organizations, but not a global recession per se:

“I don’t see a real recession, but many new powerful groups replacing the old ones, as new forms of value take the place of the traditional ones. In my opinion, Bitcoin and crypto will fuel a big portion of this revolution.”

What does the future hold for the crypto market?

With central banks all over the world lowering benchmark rates en masse and steering toward negative interest rates, it may be hard to think positively about the world economy at the moment.

However, unlike other times in the past when the only way out for the masses was to depend on traditional monetary systems, this time around there is an option to turn to the crypto market. The crypto ecosystem serves a global audience and has provided the masses with peer-to-peer trading capabilities. This makes it one of a kind, especially at a time when the global economy is being faced with a potential catastrophe.

On the issue, Waslen is of the opinion that in the short-to-medium term, global markets will most likely be defined by cash infusions to industries that are currently under siege. He also believes that with precious metals continuing to showcase steady growth as stocks fall, Bitcoin too will rise and fall with the same macro events affecting traditional markets along with other factors like the upcoming halving.

Greenspan, on the other hand, told Cointelegraph that the events that are currently unfolding are showing the global crypto community at large that Bitcoin was never designed to be a solution for an economic decline and thus its future in relation to this ongoing crisis is still not fully clear:

“Bitcoin was invented as an alternative to fiat money, which is controlled by governments and banks. So, unless the value of fiat money comes into question, I don’t see bitcoin playing any significant role.”

Lastly, Hankey is cautiously optimistic that Bitcoin has the potential to weather the storm it is currently being faced with. He believes that if Bitcoin does survive a major global recession, chances are high that its perception and overall market reputation as a legitimate financial instrument will increase even more.

Simon Peters interview was conducted by Joseph Birch during the London Blockchain Week.

Lack of liquidity mitigated damages to BonqDAO exploit: Report
Visa’s crypto strategy targets stablecoin settlements
ConsenSys CEO: ‘We’ve retained virtually all of our capabilities’ after job cuts
Ethereum (ETH) price is aiming for $1,800 in February — Here is why
Tether CTO Paolo Ardoino on taking the bull by the horn