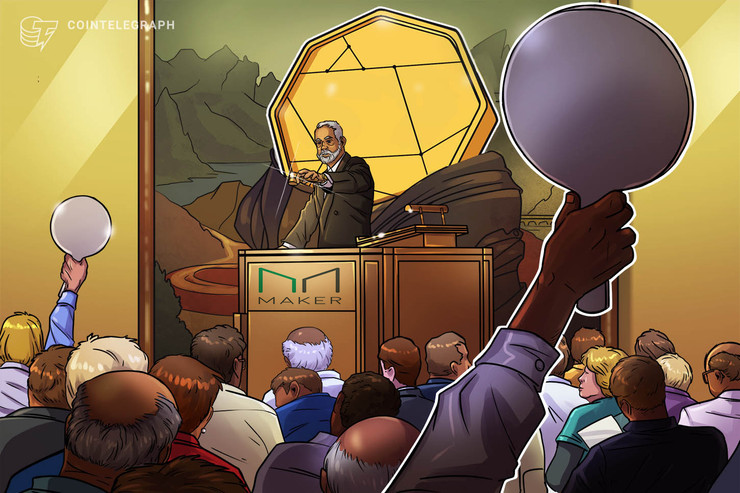 The MakerDAO (MKR) community has locked in an auction to cover a multi-million dollar hole in DAI collateral after the sudden Ethereum (ETH) price crash on March 12. Scheduled for 10:28 AM EST on March 19, the system will auction newly minted MKR in exchange for DAI.

The proceeds from the sale will be used to recapitalize the system and compensate the losses suffered by the borrowers who saw their Ethereum collateral auctioned off for zero DAI. As the stablecoin powers many decentralized finance (DeFi) applications, the stability of Maker is paramount for the entire ecosystem.

What happened to Maker?

The emergency procedure became necessary following a combination of events that left some of the DAI undercollateralized. As previously reported by Cointelegraph, the high Ethereum gas fees, combined with the rapid price decline, wreaked havoc on MakerDAO’s systems.

Maker’s Ether price feed oracle failed to update appropriately, and showed a higher price than the true market rate. A blog post by Maker Foundation further revealed that this delay helped some users escape liquidation by pouring in more ETH to the debt position.

The bids were apparently made possible by what the analysts, and some community members, believe to be improperly configured “Keeper” software that is responsible for the auctions. The “lucky” bidders had seemingly modified their implementation to not “choke when gas prices skyrocket,” while their competitors with default implementations were left stranded by the Ethereum network. Other members went as far as speculating that the attack was premeditated.

The loss led to active discussion in the MakerDAO governance forums on whether the borrowers needed to be compensated for the unfair liquidation.

Active discussion in the Maker community

The liquidation mechanism is one of the main ways that DAI maintains its peg with the U.S. dollar. A direct consequence of having unbacked DAI in circulation is that under an emergency shutdown scenario, some DAI holders would not be able to redeem their tokens for the corresponding collateral.

The Maker community is not entirely united in seeing the loss as a major issue. One community member argues that as long as DAI is trading above its peg, the under-capitalization can be maintained because it would naturally cause DAI to lose, rather than gain, value. While DAI traded at a 4-5% premium over USD immediately after March 12, the peg has been reestablished as of press time.

Other community members believe that the DAI borrowers whose collateral was liquidated on March 12 should not be compensated for their loss.

It is important to note that a MakerDAO liquidation does not entail the loss of the entirety of the user’s capital. When opening a debt position with ETH as collateral, the borrower must provide and maintain at least 150% of the value of the debt as ETH. Other tokens such as BAT and USDC have different collateral requirements.

If the value of the Ethereum collateral falls below 150%, “Keepers” can trigger an auction for the value of the outstanding debt, plus a 13% liquidation fee. Thus, since the borrower gets to keep the DAI, he would have only lost the 13% through the protocol, while the rest of the potential losses would be due to exposure to Ethereum’s price volatility.

Through the zero DAI auctions, however, the users lost an extra 21% of their capital that was supposed to be returned. Some community members argued that the loss is not severe enough to warrant a refund, and that users were aware of the risks in participating in the Maker system.

The majority of the community seemed nevertheless sympathetic to the borrowers, noting that the true risks were only partially disclosed in developer documentation — but not the user-facing apps. The “PR impact” of zero-DAI liquidations was also mentioned as a reason for compensating MakeDAO’s users.

An auction to shift the losses to the stakeholders

Following the discussion, the Maker community locked in a proposal to auction newly-minted MKR in exchange for DAI, which should cover the hole in collateralization.

The MakerDAO white paper offers this as a standard contingency plan in case the system remains under-collateralized as the normal mechanisms fail.

Ownership of the MKR token defines a Maker stakeholder, as it allows them to participate in the governance process and reap the rewards from the system’s success. Selling MKR for DAI would thus compensate the users, while diluting existing stakeholders — effectively socializing the individual losses.

While the community is still debating the specific parameters of the auction, the initial bid price has been set at 200 DAI, against a market price of $199 at press time. Should there be no takers after three days, the auction resets at a 20% lower price.

However, it seems that scenario is very unlikely. Crypto asset investment firm Paradigm pledged to cover as much as the entirety of the shortfall, with similar statements coming from crypto startup Dharma. The project championed a “backstop syndicate” currently counting over 100 undersigners who pledged to cover the shortfall “one way or another.”

“We believe MakerDAO and Dai are extremely important to the DeFi ecosystem. Thus, ensuring that the MKR auction succeeds is critical. Given the short timeline, we had to prioritize our efforts, and we decided this was top priority.”

The entire DeFi ecosystem — as well as Cointelegraph — will be watching tomorrow’s auction. Though its success is all but guaranteed, it remains an important signal for the viability and support of decentralized finance.